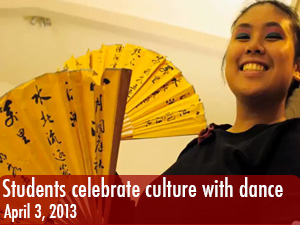 As darkness looms over Matador Square on April 1, performers fill the scene, wearing hoodies and sweats. The sound of rhythmic drumming complete the night.

An estimated 50 members are preparing for the 28th annual Pilipino Cultural Night (PCN), an event free to the public that celebrates Filipino culture through dance, theater and music. The Filipino American Student Association (FASA) is hosting the April 6 event.

With sticks held vertically in their right hands, male participants forcefully hit the ground at a steady beat. Letting out hunter-like screams, they pace rapidly in a circular motion.

At various points throughout the practice session, men can be seen wearing white, translucent Barongs, a cultural garment of the Philippines usually worn at weddings. At other times, women are seen holding onto colored handkerchiefs in both hands, waving their arms up and down sharply. They wear black long-sleeved shirts and ankle-length skirts.

Typical rehearsal for PCN members starts around 5 or 6 p.m. with a full run through, a critique, a break, and a final full run through with simultaneous critiquing. Practice typically ends at 10 p.m., but can last until 2 a.m., especially toward the performance date.

“(Practice is) long and strenuous. Sometimes we run until 2 to 3 a.m., but I don’t mind,” said Alyanna Estanislao, 18, a PCN performer and marine biology major. “Seeing PCN come together slowly, bit by bit, is kind of motivating. I love practice even though sometimes I forget to eat and it conflicts with my homework. I don’t go to sleep until 5 a.m. sometimes to be honest, but I wouldn’t trade this experience for anything.”

The event showcases cultural dances that are distributed throughout a script and storyline. Every year, the story changes. This year the story focuses on a college freshman who has no connection with his roots because his parents have assimilated into American culture. The script follows his journey as a freshman in college trying to find an identity.