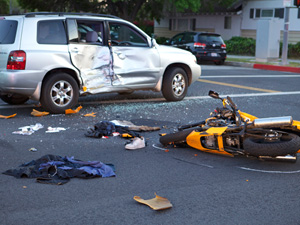 BREAKING: A motorcycle wreck that left a man in critical condition was under investigation Tuesday evening.

A Kawasaki motorcycle collided with a Toyota Highlander at the intersection of Lindley Avenue and Lassen Street near the CSUN campus about 6:45 p.m.

Clothes and shoes belonging to the motorcyclist were scattered across the road in between the motorcycle and the right side of the SUV.

Authorities could not confirm the identity of the victim or whether he was a CSUN student.

“Somebody said this guy is a CSUN student, but I don’t know. We will find out,” said Lt. Ahmad Zarakani of the LAPD’s Devonshire Division.

Zarakani added that the victim was in critical condition at Northridge Hospital Medical Center.

“He is probably going to go through surgery before we find out if he is going to make it or not,” Zarakani said.

Lassen Street’s intersections with Zelzah Avenue and Lemarsh Street were closed Tuesday evening after the incident.

Zarakani said the crash appeared to be the result of the SUV having made a left-hand turn violation or a red-light violation, but he could not confirm the cause.