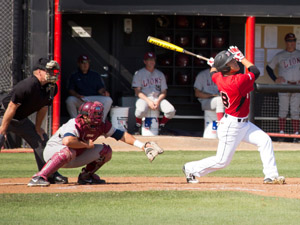 Jumping out to an early three run lead in the middle innings, the Matadors baseball team was unable to hold the lead against visiting Loyola Marymount (14-14), losing 9-7 in 10 innings Tuesday afternoon.

The Lions scored first in the third inning on an RBI single by senior catcher Colton Plaia after loading the bases on three consecutive singles.

For a second straight game, Northridge struggled at the plate, managing two hits through the first four innings.

“They did a good job of taking advantage of our mistakes,” said head coach Matt Curtis. “We missed some opportunities offensively where we could have scored. It was a good college game, both teams were competing but it was a win we left out there on the table.”

CSUN sophomore starting pitcher Brandon Warner was pulled after 4.1 innings with a runner on first, bringing in freshman pitcher Oscar Sandoval who quickly got the final two outs.

The Matadors finally broke their scoring drought on a three-run triple by junior first baseman Josh Goossen-Brown to center field that gave the Matadors a 3-1 lead going into the sixth inning.

The Matadors loaded the bases off a single to left field by freshman outfielder Anthony Lombardo. CSUN capitalized as sophomore second baseman Ryan Raslowsky and senior shortstop Kyle Attl each brought home a runner off an RBI single to give the Matadors a 5-2 advantage heading into the top of the seventh inning.

Northridge’s lead would be short-lived as LMU loaded the bases in the seventh inning and scored two runs on a groundball to third that resulted in a throwing error. A single up the middle by senior second baseman Cullen Mahoney tied the game 5-5. Loading the bases once again, the Matadors brought in junior pitcher Harley Holt, who got the final out of the inning on a strikeout.

“We let the little things build up,” said Goosen-Brown, who went 3-for-5 and was a home run short of the cycle. “They made the most out of every situation and we didn’t.”

Jumping out to another lead in the seventh, the Matadors scored on a throwing error by Plaia on a steal attempt to second base. With a runner at third, sophomore catcher Alexis Mercado gave the Matadors a 7-5 lead with an RBI groundout.

One out away from a victory, a line drive to left field went through the legs of Attl, resulting in the tying run scoring for LMU.

Scoring twice in the top of the tenth, the Lions took control of the game 9-7.

Leading off their half of the tenth with two singles, the Matadors attempted a comeback, but the next three batters went down in order.

“We competed down to the end, even the final inning,” Goossen-Brown said. “There were a lot of low spots but we still fought.”