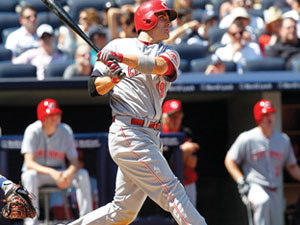 The NL West will come down to a two-team battle between the San Francisco Giants and Los Angeles Dodgers. The newly revamped and free spending Dodgers will outlast the defending World Series champs for the division crown.

Over the past year, the Dodgers have gone through a whirlwind of changes. The team’s ownership switched hands from the McCourts to a group including former Laker great Magic Johnson and longtime MLB executive Stan Kasten for an MLB record $2 billion. Since the new regime took over in the front office, they have made moves left and right to improve the team immensely.

During the 2012 season, the Dodgers made a flurry of trades, acquiring former All-Star shortstop Hanley Ramirez from the Miami Marlins and outfielder Shane Victorino from the Philadelphia Phillies. They also made a colossal deal with the Boston Red Sox that brought All-Star first baseman Adrian Gonzalez, pitcher Josh Beckett, and outfielder Carl Crawford to Los Angeles.

The Dodgers were not finished in the offseason, as they signed pitcher Zack Grienke, who had a 3.48 ERA and 15-5 record with the Los Angeles Angels of Anaheim and Milwaukee Brewers last season. This move should bolster their starting pitching rotation led by former Cy Young winner Clayton Kershaw.

The addition of this high-level of talent to the team that already has outfielders Matt Kemp and Andre Ethier has the potential to be very dangerous.

The Giants made some significant moves by locking up leadoff hitter outfielder Angel Pagan to a four-year $40 million contract, second baseman Marco Scutaro to a three-year $20 million deal, and last year’s NL MVP catcher Buster Posey to a nine-year deal worth $167 million.

Question marks surrounding the Giants rotation after Matt Cain and Madison Bumgarner doesn’t instill confidence, even with Posey factored in.

A lineup consisting of Kemp, Gonzalez, Ramirez, Crawford and Ethier, and a starting pitching rotation led by Kershaw and Grienke will lead the Dodgers to a division crown title over the Giants.

The 2012 NL Central Division Champion Cincinnati Reds will once again repeat as the division winner. They are just too strong and they are returning with most of their lineup from 2012.

Losing a huge piece of their team – captain, clubhouse leader and future hall of famer Scott Rolen – due to chronic shoulder issues that forced him to retire, the Reds hope to fill his void with Todd Frazier, who had 67 RBIs and 19 home runs last season, while hitting .273.

Although Frazier is just in his third year, he already has major league experience, filling in for an injured Joey Votto last season. Votto is expected to fill in for Rolen’s clubhouse role and bring back his .316 batting average to power the lineup.

Fireball pitcher Aroldis Chapman, who is in the process of changing from a shutdown closer to fifth starter, may hinder the Reds’ chemistry as he has publicly stated he wants to remain a closer.

The other members of their bullpen, however, comprise one of the best pitching rotations in baseball that suffered in the playoffs last season when Johnny Cueto went down with an injury. A one-two punch of Cueto and Mat Latos is hard for any team to overcome.

The Cardinals have a few areas of concern with injuries already affecting their lineup and starting rotation. Shortstop Rafael Furcal is already done for the season with an injury, while the oft-injured starting pitcher Chris Carpenter is hurt again affecting the rotation.

After Adam Wainwright and Lance Lynn, who was relegated to the third starter after an underperforming Jamie Garcia, the Cardinals rotation is laughable. Only Lynn was two games above .500 last season.

Catcher Yadier Molina’s leadership behind the plate will again be on display and necessary to help guide multiple rookie pitchers.

A solid bullpen may keep them in games late, but a great starting pitching staff and battng lineup is needed to even get them that far.

Led by Matt Holliday and David Freese, this lineup is potent and full of firepower from top to bottom, but they will need everyone to be healthy in order to make a move on the Reds.

The NL East’s two standouts are the Atlanta Braves and Washington Nationals. It wouldn’t be surprising if a race for the division title comes down to the last few games of the season. But in the end, Washington’s pitching staff is just too good and will overcome a late push by the Braves.

The Nationals aren’t just the best team in the East, they may just be the best team in baseball. In 2012, they finished the season with the best record in the NLB  (98-64), and they look even better this year. Stephen Strasburg is one of the hottest pitchers in baseball and the team’s best. He will be able to complete his first full season without inning limits after his 2012 campaign was cut short due to him recovering from surgery.

The rest of the rotation has few, if any, weak spots. It consists of Gio Gonzalez, who is coming off a 21-win season, Jordan Zimmerman, who finished last season with the seventh-best ERA in the league (2.94), Ross Detwiler and the newly acquired Dan Haren, who provides all-star experience in the rotation.

The Nationals also acquired Rafael Soriano, who stepped in successfully for the Yankees last year after Mariano Rivera suffered his season ending ACL tear. With Soriano replacing Drew Storen as closer for the Nats, Storen will likely move into the position of a setup man, adding even more depth to an already-loaded bullpen.

On offense, they are led by 2012 National League Rookie of the Year Bryce Harper. If his sophomore season is any reflection of his performance on opening day, on which he hit two home runs in his first two at bats, he is likely to have a huge season.

The Braves have the potential to do well this season and get the Nationals to sweat a little bit. After losing a one-game wild card playoff last year – which ended in a controversial blown infield fly rule call – the Braves will come back eager and hungry.

They acquired outfielder BJ Upton to play next to his brother and between the two, they should give the Braves a large chunk of their RBIs for the season. The loss of veteran Chipper Jones may be a big blow to them. There are no real mashers on this team, placing an importance on small ball in order to score runs.

However, a lack of experience in starting pitching with Mike Minor and Julio Teheran, and an injury to Brandon Beachy makes this a shaky rotation at best. Their pitching staff is no match for the Nationals and a far cry from the glory years of the 90s with Maddux, Smoltz and Glavine.