Doctor Who returns with a new gal 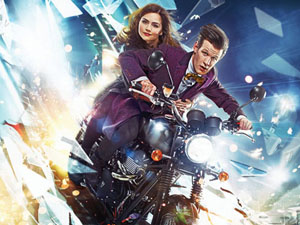 After a winter hiatus, the BBC’s “Doctor Who” is back on air and in the swing of things with the second half of its seventh season.

In the seventh episode, “The Bells of Saint John,” suspicious WiFi accounts have come to plague the planet, pulling unsuspecting users into a digital purgatory. Clara Oswald (Jenna Louise-Coleman), the girl twice dead (as an astronaut-turned-dalek at the beginning of the season and a Victorian nanny in the Christmas special), has mysteriously reappeared as a modern baby sitter with internet problems of her own.

In an attempt to call for service, she reaches the TARDIS phone. Since their last interaction, the Doctor (Matt Smith) has settled in 13th century England as a monk in seclusion, searching for clues to Clara’s identity. He is interrupted by “the Bells of Saint John,” which is really the telephone ringing from his blue police box, originally serviced by Saint John’s Hospital.

They attempt to solve her connection problem over the phone (from separate millenia, mind you), and confusion ensues. The Doctor is unaware of who she is until she spells out the family’s WiFi password as “run you clever boy and remember,” the final words she said to him the last two times they met.

By the time the Doctor arrives on Clara’s doorstep, she has already logged on to the hacked account. Her mind is harvested by an android that appears as an image from her subconscious (in this case, a girl from a book authored by the one and only Amelia Williams). The Doctor is able to counter-hack the account and retrieve her soul before it is fully integrated into the invading system, the Cloud, in true DW fashion.

In the meantime, we see a hive-like room of hackers working to further capture souls. The operation, which is run by a Miss Kizlet who works for “The Client,” is furious to find out that the Doctor has become involved. After an attempted aerial attack, the Doctor scoops Clara away in his TARDIS and on a motorbike, to evade capture by the organization. His partner uses her newly-obtained computer knowledge from her time in the Cloud to discover the hackers’ identities and their whereabouts, only to be reintegrated by an android posing as the Doctor.

The real Doctor then turns their technology against them by rewiring the imposter to upload Miss Kizlet to the Cloud, forcing the organization to return everyone’s souls to their body in order to retrieve Kizlet’s. As UNIT storms the office, The Client is revealed as the same Great Intelligence from the “Snowmen” episode, and without proper closure, we’re liable to see him again in the future.

As all returns to normalcy, the Doctor invites Clara to join him aboard the TARDIS as his new companion. Though she coyly tells the Doctor to come back tomorrow, we won’t know who she is or whether he’ll lose her again until the next episode, “The Rings of Akhaten.” Stay tuned!