Retired department chair remembered for his love of music 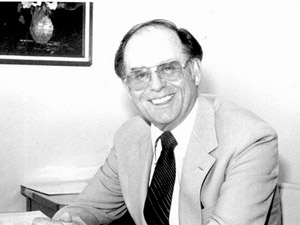 CORRECTION: Wiggins was 88 at the time of his death, not 66 as stated previously.

Dr. Clarence Wiggins, emeritus music professor and retired chair of the music department, died March 28 at 88. He had been recovering from brain tumor surgery, chemotherapy and radiation since last fall.

People who knew Wiggins said he will be missed in the CSUN community, which he served as the department chair for 24 years.

“I always enjoyed talking to Clarence and his colleagues from his time always speak glowingly of him,” Steve Thachuk, chair of the CSUN music department, said. “Of all the people who have come through the department, I would dare say that he was the most beloved and respected as a great leader, a gentleman and an outstanding member of the CSUN community.”

“(Wiggins) was chair of the music department when the university was becoming a four-year institution,” said Robert Bucker, dean of the Mike Curb College of Arts, Media, and Communication. “He was very instrumental in establishing the music department.”

Wiggins focused his time at CSUN on contributing to the university’s music program and enriching people’s lives through music.

Wiggins was initially hired in 1958 from Bakersfield College with the intention of developing a band program. His contributions expanded further and proved to be long-lasting.

He also helped start the music therapy program in the 1980s. The program, which still continues today, uses music as a tool to help people with physical, intellectual and emotional disabilities.

He told the university he started the therapy program because he wanted to expand career options available to music majors in addition to rehabilitating individuals with music.

Wiggins was recognized for his contribution to students when he received an Honored Faculty Award for Distinguished Teaching in 1970.

Wiggins’s history as a musician began before he came to CSUN. He trained as an instrumental clarinetist, served in the recording unit of the Army Air Corps, which featured an orchestra and 100-piece band, and also sang as a tenor in a few operas with the Seattle Symphony.

After leaving CSUN in the late 80s, Wiggins served as a member of the Dean’s Circle Executive Advisory Board for the Mike Curb College and made contributions to the CSUN music department and students.

“He continued his association with the school long after he left,” Thachuk said. “He has been a generous donor to the department, giving numerous scholarships, most notable, a gift to the music education program each year.”

A memorial service will be held for Wiggins at 2 p.m. this Saturday, April 6, at Northridge United Methodist Church, 9650 Reseda Blvd.

Wiggins’s wife, Margaret, suggested donations be made to the Clarence and Margaret Wiggins Music Education Scholarship Fund in lieu of flowers.