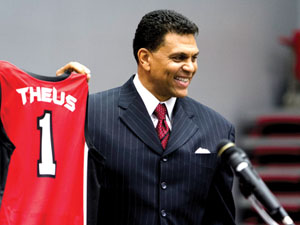 The former NBA player and coach, who signed a multi-year contract with CSUN, said his goals for the upcoming season are to “be the hardest playing team in the conference, with a full court pressure defense,” and create a team that CSUN’s community will want to talk about.

“I challenge our student body that if you support our program one thousand percent, I will put the product on the court that you can be proud of,” Theus said.

Harrison said that she is happy to have Theus onboard and believes he will develop the players not only on the basketball court, but also to have successful careers.

“We share the same values, that student success is priority number one,” Harrison said. “He is also a great storyteller. He can tell amazing, true inspirational stories about basketball.”

Theus was head coach at New Mexico State for two seasons before becoming an assistant coach at the University of Louisville under hall-of-famer Rick Pitino. In the 2004-2005 season, the Cardinals reached the NCAA Final Four and Theus was named one of the Top 25 recruiters in the nation by Rivals.com.

Getting phone calls from potential recruits nationwide since he was hired, Theus believes he has to find “the right pieces” to fit the current roster.

“Recruiting is about relationships, I have great relationships. It is about your program and we have some challenges in our program,” Theus said. “I think that you are going to see a difference in the program immediately, in terms of the look of it. CSUN basketball has sort of been the third wheel, that has to stop. That stops today.”

Bringing on his own staff, Theus is in the process of finding assistants and hopes to have his support staff finalized by next week.

“We are working on it now. I can’t say who because it’s not done yet. I will say there are a couple guys coming from higher conferences that want to work with me, that believe in my vision,” Theus said. “It’s going to be great to have them aboard. Anytime you get a new job and you can bring guys that already have jobs with you, its a great get.”

Along with playing in the NBA for 13 seasons, he was the head coach of the Sacramento Kings for two seasons (2007-2009) and an assistant coach with the Minnesota TImberwolves (2009-2011).

“I love the NBA and what its done for me, but I am a community person, I love people, and in the NBA they sort of want to keep you away from the people,” Theus said. “I think having the opportunity to be back in college is always been where my heart is. Mentoring (the players), and having an affect on their lives is something that’s personal for me.”