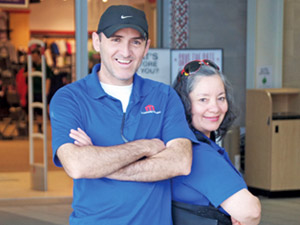 When Maria Martinez, a custodian at the Matador Bookstore Complex, cleans the bathrooms, she finds it difficult to understand how some patrons are oblivious to signs.

“The signs say closed for cleaning. And people always come in and say, ‘Uh, its closed?’ and I think, ‘What the heck? There is a sign there,'” she said. “It’s like, hello, wake up America!”

Rafael Souza is also a custodian at the complex. He and Martinez have been working together there for two years.

Martinez starts her day at 11 a.m. and works until 5 p.m., while Souza works from 1 to 7 p.m. They spend their day maintaining the two-story building, including the restaurants, convenience store and outdoor area.

Some of their responsibilities include replacing trash bags, mopping the floors, maintaining the bathrooms, unclogging toilets, cleaning the windows, changing the air filters and sweeping the ground in front of the entrance to the bookstore.

Because they are both around during lunch hour when it’s busy, they notice certain behavior among students, as well as some of their habits.

Martinez said on the first day of this semester, one man didn’t see two wet floor signs she had up near the entrance and decided to rollerblade at a high speed into the complex.

What happened next was an inevitable spill into embarrassment.

After making sure he was OK, Martinez said she looked at him and just pointed at the signs.

She theorizes that students’ attachment to technological devices is partly to blame for the distractions leading to accidents.

“On the one side technology is good (for school), but on the other side it’s bad when they are all on (computers and phones) while they are in front of each other,” Martinez said, who enjoys talking with people in person.

Souza described a similar instance when a female student was too distracted by her phone to notice the amount of space allowed by the automatic sliding doors.

“She walked right into the (glass side paneling),” he said. “It made such a loud noise that I thought the glass might break. She didn’t even care about the pain, just looked around worried about who might have seen her!”

In general, Martinez said students and those who walk through the bookstore complex are respectful.

She said students know her there and some have even tried to help her carry things. She wears a brace to support her back through the heavy lifting.

“I don’t want them to do that though,” she said. “It is nice of them but they could get hurt. It’s my job.”

Martinez and Souza work part time: six-hour shifts Monday to Friday, which means they receive no benefits, according to Tim Killops, associate director for facilities and operations for The University Corporation.

“They are great for what we need them for,” McGuire said of Souza and Martinez. “We cover a lot of ground.”

Apart from working on campus, both custodians have families. Souza has a son, with whom he likes to spend the majority of his free time. Martinez is a single mom with a 12-year-old daughter.

“She works really hard and has made a lot of sacrifices for her family,” Souza said of Martinez.

Martinez said Souza has a sense of humor, and that adds to their working relationship.

Souza, who is always seen with a smile on his face, said the two help each other throughout the process.

“We have a really good partnership,” he said. “During the first week of school she called me before I got (to work) saying she needed my help.”

Souza commented, sparking a reaction from Martinez who pretends to hit him with a broom.

“I told her next time she should bring her swimsuit,” he said, laughing.

The two said the women’s bathroom is significantly messier than the men’s.

They also agree it would help if everyone worked together to be a little cleaner by disposing of their trash in the numerous garbage cans around the building rather than leaving it on the table. Additionally, paper towels in the toilets and the urinals tend to clog the drains, and cause extra work for the custodial staff.

According to McGuire, two of the most costly and time consuming maintenance issues are graffiti in the bathrooms and gum on the floor, which is very difficult to remove.

At night, The University Corporation and the USU outsource custodial services to US Metro, according to Killops.