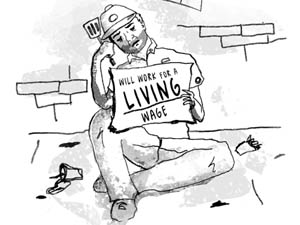 As the United States continues to crawl away from the Great Recession, positive economic indicators such as the dropping unemployment rate provide the media with a convenient talking point and sound bites. However, the point being missed by the media and pundits at large is the astronomical divide between the standard of living and the depression of wages in the U.S for the middle-class and working poor.

After the recession, the growth of low-wage jobs resulted in a larger discrepancy. Take home pay has stagnated and in some instances decreased during the last several decades, while the cost of living continues to rise. A novice at mathematics can easily see this is an unsustainable equation. Although ignorance seems to be the norm for most politicians, the leaders of this country have to realize that they were not elected to play chess with corporations that continue to make the working American exist in a constant state of check-mate.

Last week, New York’s fast food workers organized a one-day strike to demand a living wage. This is the second strike within six months where workers argued that fast-food jobs simply do not pay a wage reflective of New York City’s cost of living. But as usual, the political world has given imperceptive attention to the perpetual wage stagnating.

One of the greatest arguments that continues to exist in the political sphere is corporations are “job creators” that do not need to face burdensome regulations from the government. Indeed, political leaders strongly assert that these federal regulations will only harm the economy and thus stifle job creation. However, the argument of “job creators” is only valid if one considered the types of jobs that are now available to help the economy prosper.

Its imperative to remember that more than 60 percent of low-wage workers are employed by larger corporations with over 100 employees. More significantly, the number of low-wage jobs that continues to increase is not stimulating the economy. In contrast, the job-creators are actually impeding the growth of the nation, while deepening an already preposterous income disparity.

By the end of 2011, the total profit for U.S. corporations reached a record high of more than $2 trillion. The 50 largest employers of low-wage workers have largely recovered from the recession and now found themselves in a strong financial position. One of the top three low-wage employers, McDonald’s, has seen a 130 percent profit growth in recent years.

One of the biggest arguments for an unregulated and lower corporate tax is the use of revenue and profit made by corporations to re-invest for growth and thus boost the economy. Although the statutory tax rate for highly profitable companies is 35 percent, the rate actually paid in current years by most companies is 13 percent. So how exactly are job-creators reinvesting their profit? The answer is, they aren’t.

The top executive compensation for largest corporations averaged more than $9 million last year. In the most recent fiscal year, the hourly compensation for the highest-paid Walmart executive has been more than $9,000. Meanwhile, their employees would have to work over 1,000 hours to make the equivalent of a corporate hour of work.

In his most recent State of the Union Address, President Obama recently proposed an increase of the federal minimum wage from $7.25 to $9 an hour. The president said, “corporate profits have rocketed to all-time highs but for more than a decade, wages and incomes have barely budged.” In contrast, House Speaker John Boehner disagreed with Obama and claimed that raising wages will cause unemployment and thus burden the “job creators.”

Corporations should not only be held accountable for the perpetuation of low-paying jobs, but also for a long history of outsourcing job opportunities. According to a 2012 Wall Street Journal analysis, 35 U.S. based multinational companies “added jobs faster than other U.S. employers in the past two years, but nearly three-fourths of those jobs were overseas.” Simultaneously, the current jobs offered in the states provide a wage that keeps most working Americans just above the poverty line.

A 2013 study by Economic Policy Institute illustrates that until the 1980s, earning a minimum wage could have been enough to lift someone out of poverty. In fact, the minimum wage income during the late 1960s was higher than the poverty line for a family with two adults and one child. However, as the research indicates, “today’s minimum wage is not enough for a single parent to reach even most basic threshold of adequate living standards.” Furthermore, minimum wage-workers are no longer characterized as young high-school students looking to make extra bucks.

If the minimum wage had kept pace or expanded at the same rate as the average wage, it would be about $10.50 today. Furthermore, when comparing wages with the top 1 percent, American workers in low-wage occupations would be paid over 28 dollars an hour. Instead, as the bottom 20 percent lost more than $130 billion in annual income between 1979 and 2005, the top 1 percent continues to celebrate more than $670 billion in annual gains made during the same period. But wages must also be discussed in relation to making ends meet and the cost of an individual worker’s labor.

Since the ‘90s, the cost of living has gone up more than 60 percent. The income required for a single worker to have a real economic security should be around $30,000. Instead, one year’s earnings at the minimum wage is around $15,000. Perhaps more importantly, if the minimum wage had kept pace with productivity or with the economy’s overall capacity to generate income, it would be nearly $18.67 today.

The concept of ‘productivity’ makes up a great deal of the American exceptionalism where working longer hours while balancing two or three jobs are considered unique American traits. Indeed, not only are U.S. citizens some of the most overworked people in the world, they are also the least protected as workers.

As indicated by the Organization for Economic Cooperation, Americans work almost 400 hours more per year than workers in the Netherlands or Germany. Although countries such as Russia and Hungary have on average longer annual hours per worker, the U.S. is the only industrialized country and one of the very few countries worldwide that does not give workers the right to weekends off, paid vacations or paid maternity leave.

But to be a proud American and to manifest patriotism, one has to accept working oneself to death and selling labor for free as a natural part of capitalism where the corporate world assures that hard work eventually pays off. After all, low-occupation jobs should only be considered a stepping stone when moving up in the economic ladder which is the fundamental value of the ‘American Dream.’

However, a 2013 study by the Federal Reserve Bank of San Francisco, shows that if you were born in the bottom 20 percent, your chances of ending up in the top 20 percent are about 5 percent. Meanwhile, children born into the top quintile, almost 50 percent, are still there as adult and only 7 percent fall to the bottom quintile.

The vast majority of us do not see any advantageous benefits for a misguided sense of corporate patriotism. Instead, we work harder to barely get by. It’s a mess that needs major fixing. Unfortunately, the willpower to do so, is being drained by the very problem we face.