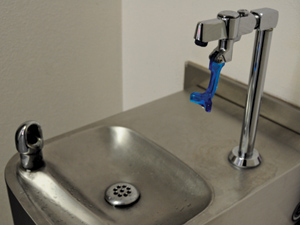 The environmental affairs committee of Associated Students (A.S.) has approved a resolution to cut down on the usage of water bottles at CSUN.

The committee is proposing to do this by allowing a company to put water-only vending machines on campus and install tall retrofit faucets on the water fountains with a lever to make it easier for students to refill their water bottles. This will be done in the first-floor of eight buildings on campus: Juniper Hall, Education, Chaparral Hall, Sierra Hall, Jerome Richfield, Manzanita Hall, Redwood Hall and Sequoia Hall.

The retrofication, or the process of adding the faucets, is being done to make it easier for students to get access to free water using bottles they already have in their possession.

The water-only vending machines, called Refill Stations, will be provided by the Hawaiian-based environmentally-friendly company, Flo Water. It will cost 25 cents for a large refill of filtered water from the machines.

Tiffany Zaich, 21, junior, food science major is supportive of both plans. As chair of the environmental affairs committee of A.S., she said that the water from Flo Water is not only environmentally better, but a healthier alternative.

“A lot of people go purchasing water bottles because they believe that the water bottles are filtered and the cleanest and best quality that you can get,” Zaich said. “But in all reality, they’re not.”

According to the company’s website, Flo Water delivers the highest quality of filtered water, which goes through six different filtration processes and reverse osmosis, removing rust, dirt, chlorine, pesticides, herbicides and other pollutants.

Wesley Graft, 24, a graduate student in the history department sees both the Flo Water machines and the retrofitted spigots as a great thing. He works at a private high school in Santa Clarita where they have similarly made efforts to cut down the usage of water bottles on campus and have incorporated the retrofitted spigots on their water fountains.

Graft said it was primarily an effort to reduce plastic water bottles in the trash. The nature of kids, especially younger ones, is to be neglectful with recycling, he said.

Currently, the A.S. senate is still voting on it. In order for a company to come to campus, it has to be approved by University Corporation.

Mike Lennon, associate director of retail operations for University Corporation, said that they would have to work with Physical Plant Management (PPM) to ensure that the refill stations

are next to water lines.

“Currently, we are not at that phase yet,” Lennon said. “Basically, it still has to go through PPM. Once we get approval, then we take it from there.”

Lennon said that he and the University Corporation are happy to work with A.S. in efforts to be more environmentally friendly.

The job of the environmental affairs committee and A.S. in general is to stand up and represent the student body, which has come out in favor of wanting filtered water stations on campus, Zaich said.

“We are making those proposals to the University Corporation, and they are on board for the flow water filtered water stations,” Zaich said.

Members of the environmental affairs committee saw the need to reduce the use of plastic water bottles due to ecological reasons, such as ocean pollution.

Zaich stays up to date with environmentalism news, such as the Trash Islands. The most well-known of these islands are located in between Hawaii and California and have a dangerously high-level of plastic pollution, so much so that birds and other marine wildlife consistently die from their ingestion of plastics.

Wyatt Taubman, founder of Flo Water, studied environmental studies and economics at the University of San Diego. Like Zaich, he too was personally motivated by the extreme case of plastic water bottle pollution that has negatively affecting oceans and marine life. This is where the concept of Flo Water came from, Taubman said. Additionally, the idea of providing truly healthy water was a key factor.

“It’s the highest quality water you can drink,” Taubman said. “The water goes through six filtration processes, and it provides continual water from on-site connection to the municipal water line. It could be hundreds of feet from water lines.”

Karlin Villafuerte, 20, a junior liberal studies major, has mixed feelings on A.S.’s plan to reduce the use of water bottles.

“I’m kind of in the middle about it,” Villafuerte said. “I think the spigots might be a bad idea. But using water fountains to refill your bottles, that’s good. I think that’s a good idea.

Villafuerte, who like many CSUN students buys bottled water regularly from campus, understands that it’s environmentally better to use washable water bottles but it’s sometimes inconvenient for a college student already-carrying at capacity.

“Sometimes I don’t do it just because I feel like ‘Oh, I have to carry it’ and that’s kind of an inconvenience. You have so many other things you have to carry,” she said.

But overall, it is better to use washable water bottles, she said.

A.S. will cover the cost of the retrofication of the water fountains, which will be around $160 per retrofication unit. The current projected estimate is $1,280. 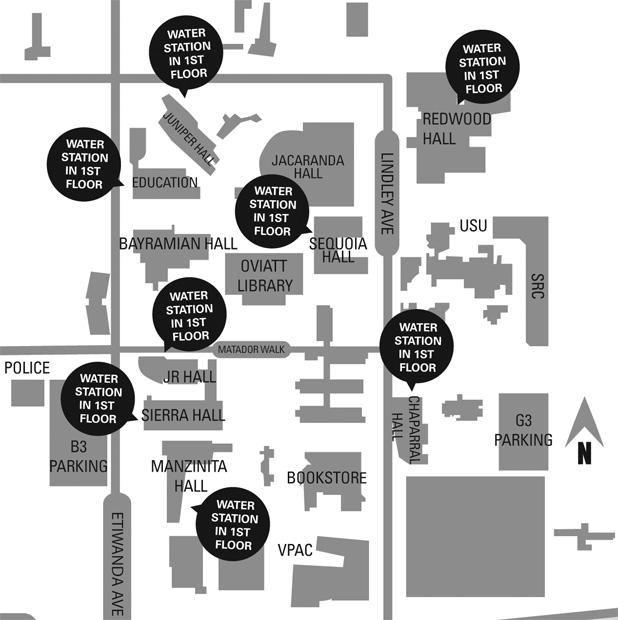