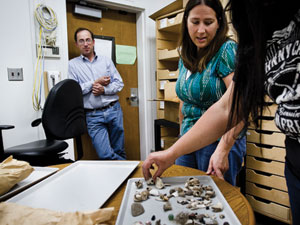 As a 38-year-old graduate student watches volunteers go through archeological materials from the Leonis Adobe site in Calabasas, she becomes excited with mundane objects like a nail, a marble and broken pieces of ceramic.

Ann Stansell, a second-year anthropology graduate student, works in CSUN’s Anthropological Research Institute once a week where she recently started overseeing undergraduate anthropology students who volunteered to help. The university has acquired much archaeological material since the 1960s and the inventory has never been properly organized.

“Even something like a nail can help you date things. Marbles indicate kids lived there. These items speak to the individuals that lived there,” she said.

Stansell graduated from Weber College in 1999 with a degree in forensic science, but has spent years of her life tracing her family’s genealogy and spending vacation time visiting her ancestors’ gravesites.

“The cemeteries I found my ancestors in are abandoned, just neglected and hidden away from everyday life,” Stansell said.

She decided to clean up those cemeteries to preserve her family history. Since she was working at historical sites, she came into contact with state archaeologists who urged her to go to graduate school and study archaeology.

In 2009 Stansell left her job at FedEx, a job she had since high school, and with the support of her husband went back to school.

The anthropology student revisited a cabin after beginning her graduate program and saw things she hadn’t previously recognized.

“There were things like rock art. It’s been nice that this has opened up additional insight,” she said.

Stansell and her husband are fans of the outdoors and frequently go hiking. She said that at times she gets caught up in scanning the environment around her as an archaeologist and not as a hiker.

“It’s a constant struggle because as a hiker you’re looking around and I’m trying to scan the ground. It’s everything I do,” she said.

Stansell recently went hiking with a fellow archaeologist on the Chumash Trail and saw a lithic scatter.

“Someone from years ago was forming something here, a tool,” she said.

Stansell is doing her thesis on social memory and the victims of the St. Francis Dam disaster, which took place in 1928 in San Francisquito Canyon, to find out what happened to the victims of that flood and exactly who those victims were.

“[Social memory] is the collective or public memory of a common understanding of past events,” Stansell said.

She said there are mass graves of the dam disaster victims that aren’t mass graves at all, but individual graves that went unmarked.

“I want to know how the largest loss of life since the San Francisco earthquake could have been forgotten,” Stansell said.

Back in the lab Stansell, shows great sensitivity and respect when uncovering the archaeological items. If human remains are uncovered she takes even further measures to maintain their dignity.

“I just think, ‘Well what if they were my ancestors’ human remains?’” she said.

Stansell’s curiosity with memorialization and forgotten cemeteries stems from the work she has done for her own family’s history. That work encouraged her to better understand how individuals become forgotten so that she can help undo that process.

“I see life as an adventure that people need to go out and interact with. People should understand their history and I have a passion for the role that should play in their lives,” she said.