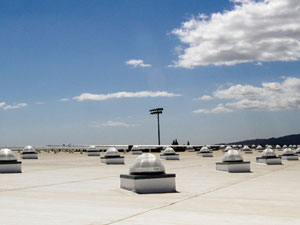 Rows of solar tubes line the rooftop of the Student Recreation Center along with a patch of solar panels, saving the University Student Union $16,393 from March 2012 to February 2013 and yielding CSUN a huge financial reward.

As part of a rebate agreement implemented during its design phase, the SRC received a rebate check for $226,255 on Monday from the Los Angeles Department of Water and Power for applying and meeting the requirements of the Solar Incentives Program.

“We applied early on in the construction. It was exciting because of how things normally go. You tend to forget about stuff like that,” said Jimmy Francis, director of the SRC.

In order to qualify, LADWP guidelines require a shading analysis at the site of each solar array that displays the sun’s path throughout the year assuring maximum output. These percentages are submitted to the LADWP during the application process.

Former Gov. Arnold Schwarzenegger signed the California Solar Initiative, allowing the LADWP to provide incentives for the installation of the solar panels and tubes.

The LADWP has budgeted $30 million per year to fund the incentive program. The goal is to build 3,000 megawatts of net-metered solar energy systems over ten years.

The solar tubes feed sunlight to the interior of the building. Sensors are installed along the walkways facing the windows that measure available sunlight to adjust power usage.

The solar technology uses “photovoltaic cells” that converts light into electricity at the atomic level.

Gil Knier, scientist at the Science@NASA program, said the space industry in the 1960s began to make serious use of the technology to provide power aboard space crafts.

The SRC has achieved gold status by LEED (Leadership in Energy and Environmental Design) for its efficiency features, plus an additional five points from the solar panel and tube installation to secure the gold rating.

Doug Cruse, senior project manager, said the panel design provides 86.4 kilowatts, which is roughly 10 percent of the power needed by the SRC. Additional panels were added after the design to produce 90.72 kilowatts per hour.

The investment in the solar panel system was expensive, but the payoff and savings are in the long term, Francis said.

Francis said the rebate money will be used to offset expenses to operate the building and may be used for a retirement schedule for equipment that will need to be replaced.

“Everything needs to be kept in good working condition, and the replacement of equipment is a huge expense because of the number of pieces that we have,” Francis said.

The replacement of 160 pieces of cardio equipment, for example, could cost between $1 million to $2 million.