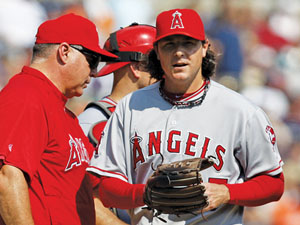 I never thought I would say, write or even think this thought, but Angels manager Mike Scioscia’s time is running out.

It’s not just me saying this. Leaving last week’s blowout loss to the Athletics on Tuesday, a common muttering amongst fans was ‘When is Scioscia going to be replaced?’

Leading the Angels since 2000, Scioscia had been the model of consistency in the American League. Currently in his 14th season, he is the longest tenured manager in Angels history. He won the team’s first and only World Series title and also has won the AL West five times in the past 14 years.

Is Scioscia a great manager that brought National League-style playing tendencies to the Angels? He is, but as Angels fans, we deserve and expect more than a three-year absence from the playoffs.

Others scoff at Yankees fans when they get upset because they don’t win a World Series title, because just reaching the playoffs isn’t enough for that, but that should be the mentality of every team’s fans. Great, you reached the playoffs and were among the top 25 percent of your league, but championships put butts in the seats and better products on the field.

Numerous players in free agency always say they want to head to a team that pays them well and gives them the best chance to win an elusive title. The Angels had a team of that caliber built last year, but it was an utter disappointment.

The team is no better so far this season and Scioscia has already called a team meeting just eight games into the season. Is it Scioscia’s fault that the team isn’t performing? No. Is owner Arte Moreno going to fire all of his underperforming players, such as Josh Hamilton? No.

But someone has to take the blame and though most of it should fall on the shoulders of young general manager Jerry Dipoto and his decision to stock one of 2012’s worst bullpens with no-names, Scioscia will be the scapegoat.

Stockpiling the offense with big boppers, Dipoto, a former big league pitcher himself, must have forgot that pitching is necessary to win championships. A rotation that includes Joe Blanton, Jason Vargas and Tommy Hanson only scares Angels fans and not their opponents. A bullpen where your only reliable reliever is Ernesto Frieri makes this look like another nail-biting season.

Scioscia is a great man, coach and baseball mind, but with last year and this year’s expectations so high and his failure to meet them are his demise. He can’t play for these players, but he needs to be the one to motivate and manage them to reach their potential. Who will be the next Angels manager is anyone’s guess, and if Scioscia doesn’t shape up within the next few weeks, fans will find out sooner rather than later.