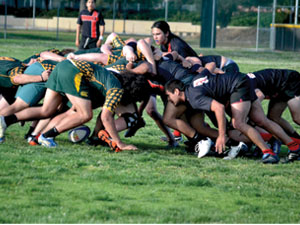 On March 2, 2013, CSUN’s men’s rugby team played its last home game of the season. A crowd of about 50 to 60 people waiting to watch the game assembled in an undesignated area at the south end of the North Field (there were no bleachers).

After warm ups and an agreement on which team would receive the ball first and which ends each team would defend, the game against Cal Lutheran began.

This current version of the rugby team is young. It has only been in existence since May of 2012, when a judicial council approved the rugby club. The team certainly doesn’t have a long history, but they did complete their first season this semester.

After the original rugby team disintegrated following the 1994 Northridge Earthquake, CSUN was without a men’s rugby team for more than 15 years. That is, until former rugby team president JP Sine decided to bring the team back.

“He saw that there’s women’s rugby team, so he started talking with the rugby women’s president Gillian and she tried to help out by opening up the team,” said Manouk Michael Bagdasaryan, a member of the rugby team and its treasurer.

“One year that they tried to bring it back, the school shut it down, the paperwork and everything didn’t happen. We recently got it back last summer and ever since then it’s been going good for us.”

The men’s rugby team competes in the Southern California Rugby Football Union, which was founded in 1937 in Los Angeles, CA.

Playing in the “Men’s National Small Colleges” division, there are 16 teams divided up into two subdivision named by color (Gold and Blue). Competing in the Gold division, the largest in-state school CSUN competes against is the University of California Riverside (CSUN lost to Riverside 21-20 in their third game of this past season).

The game against Cal Lutheran went back and forth and was close, but CSUN would eventually go on to lose the game. The game of rugby looks a lot like high paced American football to the untrained eye. There’s a lot of running and hitting, but there is a fundamental difference between rugby and football. Rugby doesn’t have as many stoppages as football.

“It’s just pure stamina, athleticism,” Bagdasaryan said. “I played football for five years but it’s nothing compared to football. Rugby it’s just like, there’s no time for you to rest. Just get up and go and go and go.”

The game of rugby is, by nature, a physical sport. Some tackles are executed at full speed like football, but players generally have little or no protection. The sport is also conditionally taxing, requiring the players on the field—known to those involved as the pitch—to continue playing until the end of the half, then the end of the game.

“I’ve never played a harder sport in my life,” said club president David Aguero. “This is the ultimate challenge for me, I’ve been a swimmer, I’ve ran, I’ve played soccer. I’ve played a bunch of other sports but rugby is like the max.”

But the team encourages anyone who is willing, to join them. The team website expresses brotherhood among the players with their motto, “If a Brother is down, We will pick him up. If a Brother has fallen, We will take his place.”

“The closer you guys are off the field, in rugby, the better you guys will be as a team,” Aguero said. “It’s one of the few sports which is like that. It’s not just the coaching, it’s not just that, but it’s about actual chemistry with your team.”

An away game against Pepperdine University was the last game of the season for the team. They lost that game too—their worst loss of the season with a score of 50-17—and finished the season 1-4.

“I think only one of the games maybe we couldn’t have won but we could’ve easily won the other two,” Aguero said. “It was just about who wanted it more that day and I guess they got the better end of the stick”

Considering the circumstances, the fact that this new club is under a year old and the sport their playing is considered one of the toughest, the record could be overlooked. But the CSUN men’s rugby team and their president have given themselves expectations for the future.

“Honestly, right now, our season’s almost over so we’re looking forward to next season,” Aguero said. “Our team started in Division III this season and I’d like our team to go up to Division II to compete with the more established clubs even though Division III has many established teams play. But since we’re a CSU we’d like to move up and see what there is out there. And hopefully we can make playoffs next year. That would be awesome.”