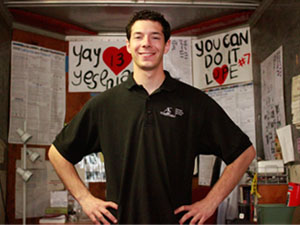 Sometimes when he needs some peace and quiet on campus, he goes into Sierra Hall, takes the elevator up and walks out to the roof.

Looking down at the pine trees from behind the rails at the edge of the roof, up there he feels separated from CSUN. He can sit, be calm and let his mind wander or just take a break from school, from stress, but mainly from painful memories.

Joshua Stepakoff, 20, is in his second year at CSUN majoring in psychology. He was only 6 years old when he was shot in the leg and hip during a hate-fueled rampage in the San Fernando Valley that began at the North Valley Jewish Community Center 14 years ago this coming August.

Americans have been discussing assault weapons bans for years now, even before President Barack Obama, back under the administration of former President George W. Bush. There was an assaults ban that was not renewed by the Bush administration.

What usually happens is after a national shooting tragedy, such as Columbine or Virginia Tech, the American public talks about issues of gun control and safety but then quickly goes back to everyday life, Stepakoff said.

It took Aurora, Colorado, and especially Newton, Connecticut, for the American people to discuss it yet again, but this time the discussion didn’t go away.

“It got more than just a statement from the president that said we’re sorry for your loss. It got a full speech, a full committee that was formed because it affected the lives of so many innocent young kids,” Stepakoff said.

Eight children are shot every single day and 32 people in total in the U.S. according to Women Against Gun Violence, a group he works with.

April 20 of this year will mark the 14th anniversary of the Columbine High School shooting that left 12 students and one teacher dead and, left more than 20 others injured in Littleton, Colorado.

After the Newton massacre, President Obama has proposed a gun control plan that outlines a ban on assault weapons, a universal background check policy for all gun purchases (which makes it mandatory for private sellers to issue criminal background checks on their customers—currently they are exempt) and a ban on extended ammunition magazines (no more than 10 rounds).

“I think we do need to be screening who gets their hands on these lethal weapons,” he said. “We don’t give a driver license to just anyone. You have to take a test. You have to prove that you’re willing and able to accept the responsibility of what can be a lethal automobile.”

Stepakoff is not against guns. He enjoys going to the gun range occasionally and sees absolutely nothing wrong with owning and practicing with guns. Practical guns are fine, but assault weapons and extended clips (with the ability to hold more than the standard ammunition of 10 rounds) are another matter entirely, he said.

Inspite of this, Stepakoff is not without injury. After the shooting he immediately began therapy. He eventually finished his sessions and stopped for about eight or nine years.

When he started being around more people, he suddenly realized his behavior and thoughts were not normal. He began having panic attacks, and after years of not being in therapy, he returned in the ninth grade.

“I’ve gone through something that a select few have gone through,” he said. “I’m diagnosed with Post Traumatic Stress Disorder, and it takes a huge effect on my life.”

He finds it hard to trust people. Stepakoff says he has a distrust for the world that cannot be avoided. He is cautious, constantly prepared with a mind that is always figuring a way out. Sometimes, in more extremes bouts, his own private room offers little comfort and peace.

“Nobody should live that way,” Stepakoff said. “That’s why, partially, I’m so motivated to do what I do because I don’t want anyone to have to go through the frustration that I have, where I’m sitting in my room and having a panic attack because I think that I’m not safe.”

In addition to working with Women Against Gun Violence, he also works with the Brady Campaign, a gun violence prevention advocacy group that works to pass and enforce state and federal gun policy.

There is a need to educate people on the long-lasting effects of gun violence, after the blood and immediate outcome, what happens to a survivor’s mind is complex.

“It’s just this huge snowball effect of ways it affects me in my everyday life,” Stepakoff said. “All stemmed from five seconds of hate.”