Students of CSUN alumna to publish book in May 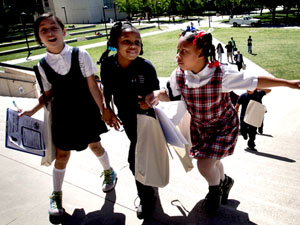 When CSUN education professor Joan Baca visited a class of third graders at Wisdom Academy for Young Scientists in South Central, she opened her lesson with a guessing game.

She gave them clues, and eventually they determined the word was “special.”

Their teacher, Kaylie Gomez, or “Miss Gomez” as she’s known by her students, graduated from CSUN in 2011 with a multiple-subject teaching credential and a bachelor’s degree in liberal studies. She has been a teacher at Wisdom Academy for one year and already has her students on their way to becoming published authors.

Wisdom Academy is a charter school located on the property of an old church. There are a total of nine classrooms on the campus (which is one of two campuses). The school is run by Los Angeles County and is not part of LAUSD, according to Gomez.

“If you drove past it you probably wouldn’t even notice it aside from the little bit of paint that says the name of the school,” Gomez said.

According to Gomez, classes are generally separated by improvised versions of walls, lacking the traditional structure of most schools.

“My classroom doesn’t look like a traditional classroom. It’s one big room with partitions and that’s the only thing separating the classrooms. We don’t even have a door to our room,” Gomez said.

Gomez and her class are having an original book published in May inspired by Louis Sachar’s “Sideways Stories from Wayside School.”

“We read a lot in my class and every time we are done reading we do some type of writing prompt,” Gomez said. “We read the Wayside School books and the first one is about this wacky school and each chapter is about a student in ‘Mrs. Jules Class.’ So for our writing assignment we made a class book and they each got to be a chapter.”

Gomez said she didn’t initially think of getting it published, but the more reading and writing the kids did, the more inspired she got to send their book to magazines for publication. After most magazines told her it was too long, she decided to research different book publishers.

“We found a publisher (Outskirts Press) that was reasonable and we raised the money,” Gomez said. “All of the kids brought in something. Sometimes it would just be $1 or 50 cents but I would say, ‘Hey, its one more dollar than we had yesterday.’”

Each of the students wrote a chapter describing one exaggerated thing about themselves.

“Its really funny,” Gomez said. “One of my students said he had really long hair that you could jump rope with. One of them said they had really big ears that could hear into other classrooms and then report back. They are so ridiculous they couldn’t actually happen, but they are really fun to read. The inspiration came from (the Wayside School) books but they all came up with their own original idea.”

The book is scheduled to come out in May and will be available for purchase on Amazon.com and Barnes & Noble. All of the proceeds will go to the school, according to Gomez.

Baca was Gomez’s professor in the interdisciplinary teaching credential program at CSUN and has remained in close contact with the alumna. She visited the students in Gomez’s classroom, which lead to them becoming pen pals.

“They are a special group and I bonded with them almost immediately,” Baca said. “They had wonderful openness that young children have, and yet they live in an environment that is very challenging.”

Baca wrote a letter to the students after her lesson, thanking them for having her, and it began a string of correspondence between the class and Baca, said Gomez.

“They write to her mainly about college, saying they know if they work hard they can go to college,” Gomez said. “They even say they want to come to CSUN.”

Gomez mentioned in an email that it would be nice if the kids could come to CSUN for a field trip, said Baca.

Being an ex-principal for 17 years at an elementary school in Burbank, Baca said she had experience coordinating events for students. She got in contact with several school administrators including CSUN President Dianne Harrison and the Dean of the College of Education Michael Eisner.

Through her efforts she was able to get CSUN to fund a bus to transport the class to campus for a field trip Wednesday.

“I thought, wouldn’t it be a wonderful program for the university to recognize teachers in very challenging environments who are making a difference,” Baca said. “This might be a model for doing something like that. There are a lot of them out there. Its a win-win for the the university and the children because she’s one of our own and it will open doors for the children.”

The class visited several different parts of campus throughout the day, including Gomez’s freshman dorm and the Bianchi Planetarium.

During their visit the students explained that Gomez is great at telling jokes and even teaches them Zumba and Yoga.

“She makes funny jokes and likes to dance in the classroom,” said Sasha, one of Gomez’s students. “But sometimes she embarrases us when she dances in front of other people.”

Baca helped supervise the field trip throughout the day.

“(Gomez) is incredible as a teacher, and what’s wonderful is that she’s one of ours,” Baca said.  “The environment and the challenge in which she teaches is not the valley. It’s South Central.”