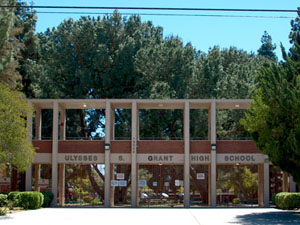 Given its proximity to Hollywood, the San Fernando Valley has always been a popular location for filming. While CSUN is the most popular location in Northridge, here are some potentially surprising filming locations off campus.

“Glee” filmed two of its episodes in the first season at Anna’s Linens which posed as the fictional “Sheets N Things”. Three of the main characters, Finn Hudson, Noah Puckerman and Terri Shuester worked at the home improvement store.

“Glee” then returned to Northridge in the episode “Furt” to the Congregational Church of Northridge where the cast and crew filmed a wedding scene. In the episode, two of the glee club members'(Finn Hudson and Kurt Hummel) parents tie the knot.

In the movie “Drive,” starring Ryan Gosling, Picture Car Warehouse served as the garage where Driver would work on his car when he wasn’t doing stunts. The garage is owned by Shannon (Bryan Cranston), in the film. According to the LA times, the character Irene, has her car towed here and after Shannon urges Driver to give her a ride home, there is the foreshadowing of a potential romance.

The Picture Car Warehouse wasn’t new to film-makers, however. The warehouse transforms cars (it has over 700 of its own available for rent) for use in movies, television and commercials.

After leaving the garage, Gosling as Driver, takes Irene and Benicio on a drive through the concrete banks of the river, which happens to be only a few miles away from The Picture Car Warehouse.

According to movie-locations.com, Pulp Fiction (1993) filmed a scene at a pawn shop in a small strip mall in Canoga Park. The pawn shop was used as the Money Loan Store where Butch Coolidge and Marcellus Wallace run into Maynard, the gimp and Zed.

Ulysses S. Grant High School has been a popular destination as a film location for many years, Most recently, the television show “The Secret LIfe of an American Teenager” has been filming here. Most of the outdoor school scenes in the show are filmed here, including the opening titles of the show. Other things filmed here include, “Freaks and Geeks,” “Clueless” and “Mr. Hollands Opus,” according to seeing-stars.com.

Some other movies that were filmed close to CSUN was “Pearl Harbor”, at Van Nuys Airport and the skate park, Skateland in Northridge, has also been used in television shows like Blind Date, and Parental Control and Some of “E.T” was filmed in Porter Ranch.