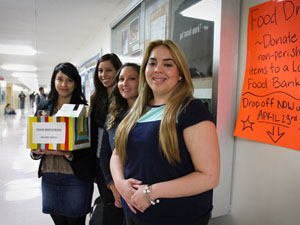 A group of CSUN students who answered a teacher’s challenge are holding a food drive and fundraiser to tackle local hunger issues.

Mark Abelsson, a social work professor, challenged one of his classes to fulfill an assignment by choosing an advocacy issue relevant to the San Fernando Valley and taking action by raising awareness in the community.

Michaela Chapman, 25, a graduate majoring in social work and a group of classmates decided to focus on hunger issues.  They contacted several restaurants and food businesses and asked them to donate either non-perishable foods or money to the Valley Food Bank in North Hollywood, the closest food bank to their target area, Northridge.

“The food donation action is designed to raise awareness on campus about the number of people who do not have enough to eat, and the strain the recession has placed on food banks/centers,” Abelsson said.

Although turned down by a handful of restaurants Chapman was able to set up a fundraising event with Pizza Hut.  Pizza Hut will donate 20 percent of its sales made on April 19 and 20 from 6 to 10 p.m. as long as the customer provides the correlative fundraising flyers, which have been distributed to students on campus and community members by those working on the project.

According to Chapman, Pizza Hut already contributes to the the Salvation Army and donates their surplus food to local food kitchens.

Some of the restaurants that turned Chapman down include Burger King, Subway, Jamba Juice and Panda Express.  The majority of these chains were unable to get approval from their corporate offices in time to participate.

“We can only help to the extent that we have resources,” Hernandez said.

According to Hernandez, the money donated from Pizza Hut will go to purchasing products that the food bank currently does not have.  This typically includes cereal, rice, beans and baby food.

“Without a concerted effort to educate the public about food waste and support food banks, more people will go hungry, a situation particularly deleterious to children’s development,” Abelsson said.

In addition to the restaurant collaboration, Chapman and her group have set up six food donation boxes throughout campus.  There are two at the Arbor Grill, one at the social work office in Sierra Hall, two at the Sierra Center and one at Geronimo’s.

They are requesting non-perishable foods such as canned goods, dry pastas, rice, flour and sugar.  Collected items will be distributed equally to food pantries throughout Los Angeles. Their last day for donations is April 25.

“As future social workers, it is our job to advocate for those who do not have a voice,” Chapman said.

Other project topics being worked on by students in Chapman’s class include homelessness among veterans, animal population control and prisoners’ rights.

“This class is about analyzing policies that impact urban families across a wide-range of issue areas the students’ choose, and learning how to advocate for policies and actions that promote social justice and the well-being of these families,” Abelsson said.