NBA playoffs seem to be free of major upsets 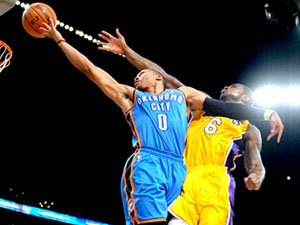 This matchup is intriguing because of the history between Kevin Durant, Russell Westbrook and James Harden. Harden was traded to the Rockets before the season started and has become a superstar and a scoring machine. The Thunder are the No.1 team in the Western Conference, giving them home-court advantage and illustrating how good of a team they are even without Harden, showcasing a perfect tandem of Durant and Westbrook. The Thunder are the better team and will be able to shut down the Rockets without a sweat since Harden is the only consistent scorer on the team. Last year’s phenom Jeremy Lin and Chandler Parsons help lead a Houston offense that won’t be able to overcome Oklahoma City’s all-around play. This matchup looks good on paper but won’t be once the series starts.

The Spurs will defeat the Lakers in six games due to the Lakers’ lack of consistency on offense and defense. Kobe Bryant is out of the playoffs due to an Achilles injury, which puts this team in a deeper hole going against the Spurs. An already hobbled Steve Nash, who still hasn’t come back from his injury, doesn’t solve any of L.A.’s problems. Tony Parker and Tim Duncan will use their veteran experience to limit the Lakers offense to Dwight Howard and Paul Gasol. Forcing Howard to shoot free throws with a hack-a-Howard strategy, role players like Antawn Jamison will have to make vital contributions to make this series competitive. Gregg Popovich will out-coach Mike D’Antoni to get the Spurs past the first round.

This is an interesting series because of the dynamics surrounding the teams. The Nuggets are a team made of good players without a recognizable superstar while the Warriors have two stars – sharpshooter Stephen Curry and David Lee – carrying the team to its first playoff berth since 2007. The Nuggets, however, will win due to them having home court advantage and because of their defensive prowess, something the Warriors lack. Andre Iguodala, who was acquired in the three-team blockbuster centered around Dwight Howard, is a shutdown defender who will embrace the task of either stopping Curry or shooting guard Klay Thompson. Andre Miller, Wilson Chandler, Corey Brewer, and Javale McGee round off the Nuggets’ strong bench and will be the catalysts to lead this team past the first round.

Based on the previous battle last year between these two ball clubs, which Los Angeles won, its safe to say this series will be the most exciting first round matchup in the West. The same result is expected since the Clippers own home court advantage and have strengthened their roster compared to last season. Also, they beat the Grizzlies 3-1 in their season series, giving them confidence going into the playoffs. Chris Paul’s leadership and playmaking skills will be the deciding factor in this matchup as the Clippers look to dismantle the Grizzlies’ top-ranked defense anchored by hard-nosed players such as Marc Gasol, Mike Conley, Tony Allen, and the newly-acquired Tayshaun Prince.

Milwaukee has no shot whatsoever. Simply put, Miami is that team and LeBron James is that dude, the de facto basketball player. The level James is on has been attained by few – we are witnessing not just a future hall-of-famer, but a top five player of all time, smack dab in the middle of his prime. If James alone wasn’t enough for Milwaukee to lose sleep over, he also has Dwyane Wade, Chris Bosh and an extremely good 3-point shooting supporting cast to help him out. Enough said.

This will be the most exciting opening series out East. A completely healthy Celtics team with Rajon Rondo running the point would upset the Knicks in a full seven-game series.  The simple fact of the matter is that Rondo is, and will remain, out. That gives New York the slight edge. Carmelo Anthony has been unconscious as of late, averaging 35.1 points per game over his last 10. His play of late earned him his first scoring title, as he out-dueled Thunder superstar Kevin Durant. Melo has been getting a ton of help from super-sub J.R. Smith as well. Smith has elevated his game at least two levels the past month or so by taking better shots and staying focused. He is finally starting to develop into the All-Star caliber guard he was projected to be earlier in his career.

The Celtics do not have a true starting center, which combined with the Knicks’ youthful roster, is a major concern. They do have rugged veterans with heart, though. Paul Pierce and Kevin Garnett can still play at near-elite levels, and with those two in the rotation, you can never count Boston out. Not to mention, the recent outburst of swingman Jeff Green. Like Smith, Green is on the verge of becoming an All-Star. It will require a final battle, a “refuse to lose” effort (could this be the last time we see KG and Pierce?) by the Green team, led by Mr. Green himself, to get past the surging Knicks.

This should be an easy advance for the Pacers, despite their late-season struggles. Indiana is an elite defensive team for a reason. They will find themselves in the playoffs, shutting down the streaky Hawks. It all starts with Paul George, Indy’s best player on both ends of the floor. George is in the conversation for both Defensive Player of the Year and Most Improved honors.  He carried his team to home court advantage in the first round of the playoffs when everybody thought they were doomed without the often-injured Danny Granger.

Losing Joe Johnson had no positive effect on Atlanta; it was basically a move that said they are entering a rebuilding phase. They no longer have that designated scorer who can offensively close out games. The Hawks are also going to get dominated on the glass by the Pacers (Atlanta is 24th in rebounding). This is the same team that put up a pathetic 58 points against the Bulls (20 at the half!) on Jan. 13 and nearly set a new franchise-low in points in a game.

Imagine if Tom Thibodeau had a master trick up his sleeve; what if he were to bring back a healthy Derrick Rose to start the playoffs without mentioning a word to the media? Rose has been cleared to play since mid-February and has been practicing with his teammates. This would surely throw off Brooklyn (or any opponent for that matter) and their defensive game plan. Even if the thought of Rose returning for the playoffs is wishful thinking, Chicago has more than enough firepower to extinguish the Nets from contention. The core of Carlos Boozer, Loul Deng, Joakim Noah and Jimmy Butler are very strong defensively and Nate Robinson can light up the scoreboard if given the chance. The Nets look great at times but are too inconsistent. They are 32-6 against sub-.500 teams, but only 15-27 against winning teams. The Nets lost the season series to the Bulls 3-1.