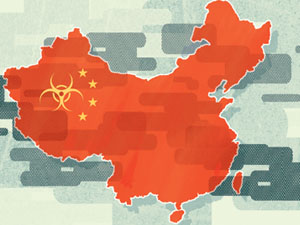 Free association time. I say “China” and you say… “air pollution.” Not what you were thinking? Maybe it should be.

The giant Asian nation of panda bears and a super long stone wall is fast becoming a place where residents have to chew their air before they breathe it. China’s economy has been growing for years now, mostly due to a massive increase in manufacturing. “Made in China” was stamped on an estimated 1,822 hundred million dollars worth of goods last month alone according to the financial website, Trading Economics.

Churning out all those plastic toys and cheap electronics is taking a toll on China’s environment, especially the air. Winding around smokestacks and factories are a few million cars as well. All that exhaust is just adding to the miasma of pollution. The Chinese government doesn’t have the same standards California does when it comes to cleaner-burning fuels. Is there even a Chinese character for “smog-check?”

The problem is very serious, especially in China’s larger cities. The Environmental Protection Agency defines good air quality as anything under 50 particulates per cubic meter. And it looks like Beijing had a bad winter this year. The United States Consulate monitors air quality in the city. They reported 19 days with a “hazardous” particulate score of over 301 in January alone. At that level, the consulate warns of “serious risk of respiratory effects in [the] general population.”

Breathing in all this hazardous waste has devastating effects for everyone, but children and the elderly are the most affected. For kids, all this crap in the air translates into developmental delays and fun little diseases like asthma and (strangely) diabetes. For their grandparents, it can simply mean an early death.

Last December a frightening study was released that said that about 3.2 million premature deaths worldwide could be attributed to air pollution. Of those deaths, 40 percent of them occurred in China according to the Health Effects Institute. That’s about 1.2 million people, or roughly the population of San Diego.

The biggest threat comes from fine particulates in the air, mostly a product of coal burned to generate electricity and heat homes. The smaller the particles, the more dangerous they become, because they can lodge in the lungs and even make it into the bloodstream. Once the nasty little bits are in the body, they can contribute to cancer and breathing disorders. More proof that we just aren’t meant to ingest coal dust. Who knew?

It wasn’t so long ago that our air was pretty terrifying too. Back in the 1970s and ‘80s, Los Angeles was as known for its thick, brown air as it was for palm trees and movie stars. You used to be able to see it while peering out your little window on final descent to LAX, or even when driving down from the mountains. Our air pollution problems stemmed from the huge number of cars on the six-lane freeways, and our unique topography. Any resident of the valley knows how smog can get trapped between the mountains, resting above the concrete and asphalt like a film of dirty cellophane.

Luckily for us, laws were passed to help curb the amount of filth that was allowed to be spewed into the air. The Environmental Protection Act and the Clean Air Act did a lot to stop manufacturers from coughing fine particulates into our air. Laws mandating smog checks for cars and cleaner-burning fuels helped to reduce the damage made by millions of automobiles. Despite the increase in the number of cars in and around Los Angeles, our air quality has actually improved over the years. We certainly still have our smoggy days and we don’t always even meet the federal standards for clean air, but it has gotten a lot better.

Now, Gov. Jerry Brown is hoping our reputation for cleaning up the atmosphere will translate into money for the state. He spent the last week or so touring China, talking to government officials there and schmoozing with a lot of private interest groups. The hope is that California businesses will be able to help China clean up its air. Of course, all that green know-how costs green money. Brown is hoping California businesses will bring home a lot of taxable dollars after this little field trip.

What a terrific symbiotic relationship we’ve got going here! China runs huge factories around the clock, staffed by people who work crazy hours performing menial tasks so we can buy the latest techie toy or plastic doll. While the regular folks toil, a few wealthy business owners get rich. Really, really rich. But all this industry has created a problem. The air is so polluted even the wealthy can’t avoid it. What to do?

Call in the even wealthier Americans. We’re all too happy to help poor China out with their little “I-wanna-breathe” problem…for a price. There is no doubt something has got to be done about the pollution situation in China. Even if you think they should deal with their own public health issues, their pollution is still harming the planet’s ozone layer. It’s in everyone’s best interest to keep that damage to a minimum.

The problem with this approach is the impetus is more about what makes money than what’s good for the people. For all their bluster and bullshit, the only reason Brown and his friends have become interested is because we have our own little economic situation. A boost to California industry would be good for taxpayers.

Do we have to do it on the backs of asthmatic kids and cancer-ridden little old people?