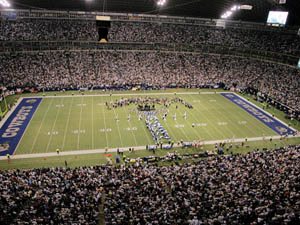 Sporting events are an escape from reality, not a place to worry about greenhouse gases, melting glaciers and fossil fuels. Most sports fans come to a game, grab their beer and begin to berate the opposing team without realizing the carbon footprint they are leaving.

Game day in professional sports includes packed stadiums with a massive environmental impact. A 78,000 seat football stadium can consume 65,000 kilowatt hours of electricity and 35,000 cubic feet of natural gas. This is meant to show that sports have a profound impact on our society and have such an influence on not only our planet, but individuals who attend these games.

Sporting events are meant to be a fun and loud, but there are various measures that have been taken to make them environmentally friendlier. The Natural Resources Defense Council (NRDC) has produced Greening Advisors for all MLB, NFL, NBA, NHL and MLS teams. The purpose of the NRDC advisors is to reduce environmental impacts by commissioning energy, waste and water efficiency audits which result in savings for all teams involved.

It only makes sense. Sports are a huge part of American culture and by going green, these leagues can inspire the casual fan to change their daily habits and help sustain our planet. There is an insane amount of trash and waste that is compiled at these sporting events and learning how to dispose of them in a responsible way is an important step in keeping our Earth clean. There has been a cultural shift in the way the majority of society views our crumbling environmental condition and it is refreshing to see the sports world step up.

Here in Los Angeles, the Staples Center, home to the Lakers, Clippers and Kings, swapped out 178 flush urinals for waterless ones which cut its annual water use by seven million gallons. The roof also includes 1,727 solar panels which will provide significant benefits over the next 25 years including the elimination of 10,000 tons of carbon dioxide.

These environmentally sound practices at sports arenas are a relatively new phenomenon. The pioneer of this shift was the Philadelphia Eagles back in 2003, when they launched the Go Green Initiative. Some of the highlights of this project include recycling, renewable energy, neutralizing carbon output, reducing greenhouse gas emissions and planting trees. Lincoln Financial Field now runs on 100 percent clean energy after purchasing 14 million kilowatt-hours  of renewable wind energy.

Even the most minor changes could impact our sustainability considering how the scale of each sporting event. These green initiatives should be a no-brainer for those sports teams that are slow on adopting them. It garners great publicity from fans as well as the media and it positively impacts our planet.