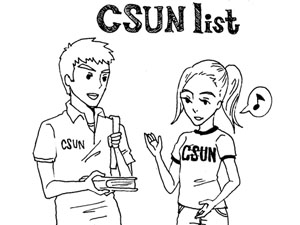 Associated Students is developing a trading website similar to Craigslist called ‘Matador Exchange’ for the exclusive use of CSUN students, which will be ready by the end of the semester.

The website will be an easy way for students to sell their textbooks and furniture, according to A.S. Environmental Chair Tiffany Zaich.

“Its all up to the students how they want to use it. For instance, someone may have a futon or a BBQ within housing that they want to get rid of because they’re graduating or they’re moving out to a smaller apartment,” Zaich said. “Instead of accumulating waste, which is what housing does, they can sell it quickly and safely on campus. ”

The idea for the website sparked last year, after the environmental committee saw how much waste was being left over by students moving out of on-campus housing, Zaich said.

“It was known as ‘CSUN’s list’ popularly because that was kind of the tag name that we were going with so we could get people aware of what we were trying to do and what it is,” Zaich said.

The web address will be shop.csunas.org.

Jennifer Hanson, a senior economics major, said she would use the website to sell her books.

“This sounds great, because every time I try to sell my books online, the shipping costs are so expensive that it is almost not worth it,” Hanson said. “I would be interested to see what kind of furniture is on there to buy, too.”

The goal of the website is to make CSUN more green and sustainable and help students save money by selling their old textbooks and furniture in a safe environment, Zaich said.

“Implementing the website for housing is the most crucial, just because we want to reduce the waste,” Zaich said. “They have furniture and things that are in great condition, and it just gets tossed in the trash because they have to be gone in a certain amount of time right at the end of the semester.”

Students will be able to access the site with their CSUN ID and email address.

In the textbook section, the site will organize books based on colleges at CSUN.

“We can go to the extent of organizing them to the specific classes, but that just depends on how much time our web developer has, and we really want to get the site up before finals,” Zaich said.

The web developer is Hovhannes Mkhitaryan, a student in A.S marketing, who believes the next step is marketing the website to make students aware of its presence.

“Setting up the website is easy, but once it is up and running, we might have to hire an intern to help monitor it,” Mkhitaryan said.

The website will be monitored by Mkhitaryan and Zaich to make sure nothing inappropriate will be sold on the site. They will also make sure the site is working properly.

“We will have campus police monitor things here and there as well,” Zaich said.

The website will also be implementing options for carpooling and potentially a way for students who live on campus to rent cars.

“We are going to implement Ride Links (for carpooling) on the site,” said Zaich. “You create a profile identifying whether you’re a non-smoker or smoker, what kind of music you like and don’t like, or even whether you prefer a male or female driving companion. Then, you get linked to someone based on where you live.”

They also hope to integrate Zim ride, which is a service that allows students to rent Prius’s for use on the hour for those who do not own a car, said Zaich.

“We saved money by using a student in marketing to build the website, which is really beneficial, and it lowers the cost for us,” Zaich said.

The A.S. Environmental Committee received a $1,000 grant from Green Ovation to help fund the project, and the rest of the expenses will be funded by A.S.