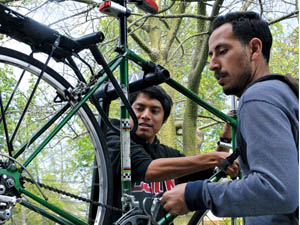 During his senior year at Downtown Magnet High School in 2009, David De La Cruz decided to pick up cycling on his own.

And from time to time when his bike needed maintenance he would repair it on his own.

When he arrived at CSUN the following year, he wanted to get involved in something that fulfilled his interest in cycling. He stumbled upon the Bicycle Club at CSUN.

“I found these folks on campus that were advocating for cycling, safer cycling, urban planning within cycling, and sustainability,” De La Cruz said. “The group’s focus consisted of most of my interests.”

The Bicycle Club, with an informal name change to the Bike Collective in the fall of 2010, is an on-campus community of CSUN student cyclists whose sole mission, according to the club website, is “to provide mechanical resources, safety information, advocacy for and the establishment of a communal base for those who commute, and get across campus via bicycles.”

The club’s emphasis is empowering commuters to take an alternative and sustainable mode of transportation to CSUN.

At the bike clinics, the most common fixes are chain or brake problems. The fixes are voluntary work provided by the bike collective members. The tools used by its members have been donated or purchased through Associated Students funding that provides money to recognized chartered clubs on campus. Throughout the course of the last two years the bike collective has increased its equipment stock significantly according to De La Cruz.

Members of the Bike Collective hold equal positions, and the club has a communal decision-making process for event planning and club activities.

Students can become a member of the organization by attending meetings and events, and participating in club activities is the key to membership. Meetings are held to discuss the goals of the university organization. Events are held for students to learn about cycling, bike repair tips and the Northridge community.

Madison Carroll, a CSUN graduate student in kinesiology, has been a member of the group for more than a year. She said the club has provided her with the opportunity to meet great people who have a passion for bicycles.

“We just have so much fun together,” said Carroll. “It is just an amazing way to get people together.”

According to Carroll, the club’s vision is demonstrating to the public how bicycling is an accessible, safe and economically-friendly commuting option.

The organization not only reaches out to CSUN students with bicycles, but to those without one. To get the word out, the bike collective has a Facebook page, a Twitter account, newsletters and a WordPress site.

Carlos Sapon, a freshman majoring in history, joined the group last semester after he participated in a class project, requiring him to check out an on-campus club.

“After I went to one of their meetings I just liked who they were and what they did,” he said. “I have learned how to fix my bike, my rights as a bicyclist, and I have really enjoyed the bike clinics because it has taught me the ins and outs of cycling.”

Sapon feels that the Bike Collective has also showed him an alternative and inexpensive option for commuting.

“Our message isn’t vocal and straightforward. It’s embedded in our actions, so we discuss this them during meetings,” De La Cruz said. “We also understand and recognize cycling means something different to everyone, which is a trait that the Bike Collective thrives on.”

In the fall of 2012, the club held a bike giveaway. It also recovered several bicycles and refurbished them for a bike rental program, and three were given away to students. In addition, the group has a project underway that includes the creation of a permanent space for a cycling hub regarding repairs, advocacy and education.

“We recognize how many of our members commute from as far as Highland Park and Boyle Heights,” De La Cruz said. “We serve as a support group catering to whatever their needs are regarding the bicycle. We spread our word and presence on campus by being seen, being active and ensuring folks know who we are and what we do.” added De La Cruz.

Club members are looking to expand cycling beyond the CSUN campus.

“If you want to expose yourself to a movement that is currently developing throughout Los Angeles, the United States, and the world, it is cycling,” De La Cruz said. “There is more of an emphasis on bike infrastructure and a need for more bicycles to create a sustainable environment for the world that we live in.”

“I don’t know what else to say,” De La Cruz said. “A bicycle is just amazing.”