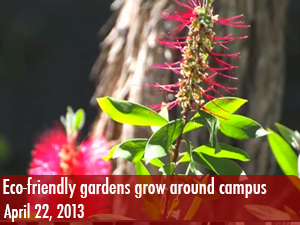 A new garden which will feature plants native to the Northridge ecosystem has been built near the transit center as a result of leftover dirt from the center’s construction last year, adding to the numerous sustainability sites around CSUN.

The garden was a joint project between physical plant management (PPM), the sustainability and biology departments and facilities planning, according to Dr. Helen Cox, professor in the department of geography and Institute for Sustainability.

“The whole idea was born out of what to do with the excess dirt left from the building of the transit center,” said Colin Donahue, associate vice president of facilities development and operations. “Instead of paying to have the dirt hauled away, (we decided to) reuse the earth and create something that could be easy to maintain, that was beautiful and reduce our environmental footprint.”

Building the garden with plants that were native to the Chaparral and Santa Susana regions was less expensive and more sustainable than paying to get rid of the dirt and paving a sidewalk, Donahue said.

“We won on several levels. We saved money, eliminated excess trucking that would generate CO2 (carbon dioxide) and we created something beautiful to look at,” Donahue said.

The garden will also save water, be used as an educational space and will serve as a native habitat for the birds and bees native to the Northridge area, Cox said.

Geography students helped survey the land with Cox, creating a topographical map that was used as a base plan while PPM was responsible for the irrigation and plant installation.

Brenda Kanno, manager of CSUN’s Botanic Garden, was responsible for picking out the plants and flowers, which were planted in late January and early February.

“California natives are programmed to try to survive. Right now they may not look like they are growing, but they are putting in deep roots,” Kanno said. “They bloom very nicely, they can do very well in a drought climate and look pretty.”