Damian Lillard stands alone as NBA’s Rookie of the Year 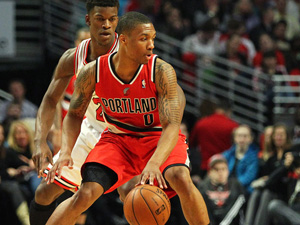 The NBA season’s Rookie of the Year award is going to go to point guard Damian Lillard of the Portland Trail Blazers.

This past NBA draft, the sixth overall pick has by far had the most impressive season among all the rookies this season. Lillard is the swept all six NBA Western Conference Rookie of the Month awards, which makes him the eighth player in league history to do so, joining elite-tier players such as David Robinson, LeBron James, Carmelo Anthony, Blake Griffin and Chris Paul.

Lillard was ranked first among rookies with his averages of 19.0 points and  6.5 assists per. His 19.0 points per game puts ranks him as 13th in scoring in the league. These numbers make him the fourth rookie ever in NBA history to average at least 19 points and six assists per game for season, putting him on another list filled with all-time greats:  Allen Iverson, Damon Stoudamire and Oscar Robertson.

His durability allowed him to start every game this season as he led all rookies in minutes played at 38.6 per game, which is also third among all NBA players. Notably, he’s also the first rookie to lead the league in total minutes played (3,167) in a single season when Elvin Hayes accomplished this feat in the 1968-69 season.

His 185 made 3-pointers this season broke the Portland Trail Blazer franchise record of 181 set by Damon Stoudamire in the 2004-05 regular season and the rookie record of 161 made three pointers Golden State Warriors point guard Stephen Curry’s three pointers which was set in the 2009-2010.

Lastly, In this season’s opening regular season game, Lillard’s 23 points and 11 assists made him  the third rookie in NBA history along with Oscar Robertson and Isiah Thomas to record at least 20 points and 10 assists in their NBA debuts.

In his game against the Los Angeles Lakers on April 10, Lillard became the first rookie since Lebron James to score 38 points and tally 9 assists in a single game. He has also scored at least 20 points in 42 games and at least 30 points in five games this year, which include 30 points against the Denver Nuggets, 35 against the San Antonio Spurs,  37 against the Golden State Warriors, 33 against the Miami Heat and his previously-mentioned 38 against the Lakers.

His outstanding play also increased Portland’s win total by five to 33 this season despite the team dealing with numerous injuries, and for a portion of the season, he had his team in the mix for a playoff spot.

Lillard’s record breaking rookie season, along with his durability to play and start every game this season puts him above and beyond the rest of the rookies in the NBA