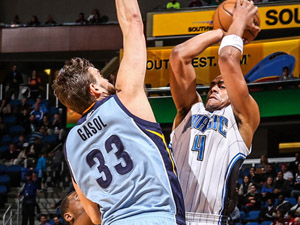 Marc Gasol is hardly the flashiest player in the game, but his intelligence and his instincts make him the most feared big man on the defensive end. Although his 1.7 blocks per game and his 7.8 rebounds per game are hardly enough to get anyone’s attention, it’s what he does off the ball that puts him over the top.

Stats don’t tell the whole story when it comes to Gasol. One of the biggest misconceptions when it comes to judging a good defender is how many blocks that player has. If blocks were the deciding factor, Larry Sanders, averaging 2.8 blocks a game and 9.8 rebounds per game, would take home the honors. In fact, Gasol is 23rd in the league in rebounds per game and 12th in the league in blocks per game.

What doesn’t show up in the stats when it comes to Gasol is the amount of shots that are contested and altered as a result of the seven foot Spaniard roaming the paint. Gasol’s defense and paint presence is what enabled the Grizzlies to stay afloat and secure a playoff spot in the Western Conference after Rudy Gay was traded to the Toronto Raptors.

With a league full of athletic freaks of nature at the center position including Javale McGee, Deandre Jordan, and Dwight Howard, Gasol does not even compare. What he lacks in athleticism, he makes up for in natural defensive intuition. Gasol is by far the smartest center in the league with the ability to read, react, and is almost always in the right place at the right time ready to take a charge or force a guard to change his mind about entering the paint.

The Grizzlies as a whole have plenty of great defensive players such as Tony Allen and Conley, who are both known as nightmare matchups, but Gasol is the shot-caller and vocal leader of that defense. In a current NBA landscape where alley-oops, athleticism and scoring sells tickets and fills seats, defense isn’t necessarily appreciated as it slows the pace of the game and takes away from its aesthetics.

Gasol is old-school and a legitimate game-changer on both ends of the floor. He is able to switch on pick and rolls and somehow is able to slide his feet far enough to cut off a penetrating guard who expects to fly right by him. With Gasol’s stifling post defense, head coach Lionel Hollins isn’t forced to send a second defender to double team post players, which could potentially yield wide open shots from late rotations.

It’s difficult for the casual NBA fan to get excited about defense but to just watch Gasol on the defensive end of the floor is an absolute clinic. Gasol has been recognized as an All-Star but it’s about time his relentless and underrated defense has been honored.