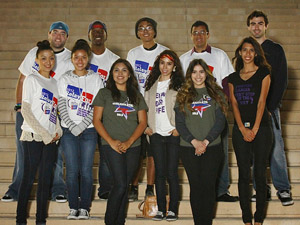 CORRECTION: Saturday will be the 6th annual Relay for Life event held by the CSUN Colleges Against Cancer club, not the 8th, as stated in the article. The club has been been established for eight years.

The CSUN Colleges Against Cancer club will host their 8th annual Relay for Life event Saturday at 10 a.m. at North Field in an attempt to raise $50,000 for cancer research.

The event will last 24 hours and participants will form teams of any size to camp out and take turns walking or running around the field. It costs $10 to join a team, but organizers of the event encourage every individual to raise $100, said Esmeralda Ramirez, CSUN Colleges Against Cancer treasurer and Relay for Life Growth chair.

“The hard work and stress in the planning is worth it,” Ramirez said. “It’s really rewarding.”

Club President Stefanie Ventura has been doing Relay for Life since she was 16.

“When I came to college, I knew I wanted to find a club that did the event.” Ventura said. “I believe doing the event is a personal choice. We participate because we have a loved one who has been touched by cancer. You get the feeling of having done something positive for a great cause.”

Last year, the event raised $40,000 dollars, and this year the club decided to raise their target to $50,000, said Todd Miller, Colleges Against Cancer member.

If you fundraise $100, you get a free t-shirt and free food,  Miller said.

So far, the event has raised only $10,900 and has 380 participates signed up on 49 teams as of Monday evening, according to the Relay for Life of Cal State Northridge website.

“People usually wait until the last minute to fundraise, so we will probably get a lot more money by next week,” Ramirez said.

In previous years, the event was held in the main quad in front of the Oviatt Library. For security and accommodation reasons, they decided to move the event, said Ramirez, who has been a part of  the last two events.

“We decided to move it to try something new. It is more secure (at North Field) because it has only one entrance,” Ramirez said. “Plus, there is more room to accommodate people and tents.”

The club has been working hard to raise money by setting up tables on campus recruiting participants for the relay and having students decorate Luminaria bags.

“Luminaria bags are bags that people can write on and dedicate to a victim of cancer. We were collecting donations, while students decorated them,” Miller said. “Unfortunately we aren’t allowed to sell anything. We can only accept donations, which makes it harder.”

During the Relay for Life Luminaria Ceremony at 10 p.m. votive candles are lit inside of the personalized bags to honor those who have lost their lives to cancer, according to Relay for Life.

“If someone can’t make the event they can donate money or dedicate a Luminaria bag for $10 online to help out,” Miller said.

This week, the club will be taking flyers to all departments and setting up mouse pads in the USU computer lab in a last effort to advertise the event, Ramirez said.

To those planning on attending the event, relayforlife.org suggests bringing basic necessities such as coolers with food and drinks, pillows, sleeping bags and tents, campsite decorations, sunscreen and clothing appropriate for the weather. The event will go on rain or shine.

“Right now we are focusing on growing our teams before the event. Anyone can sign up and join a team,” Ramirez said.

People can show up on the morning of the event and join a team, Ventura said.