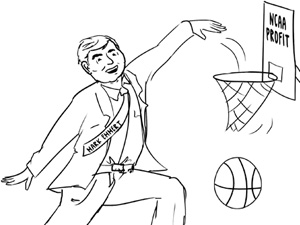 Watching the March Madness tournament last month, I saw players who will never make it to the NBA take elbows to the face, dive for loose balls and take charges, all for no financial compensation.

Recently, the state of California passed Senate Bill 1525 which requires universities in the PAC-12 conference in Division I to pay student athletes’ tuition, the full cost of attendance and an additional $3,600 a year. I applaud this bill because it is a step in the direction of fairness, and hopefully more conferences will follow.

It makes sense that athletes should always play a sport for the love and not the money. However, when the National Collegiate Athletic Association (NCAA) recently struck a 14-year deal with Turner Sports and CBS through 2024 worth $10.8 billion, I am forced to take the side of the players.

To put this into perspective, this deal is paying the NCAA close to $11 billion for three weeks of basketball per year. That is an astronomical sum of money, and none of that reaches players as compensation.Yet, they are the very reason the seats are filled, ratings are through the roof, and why working citizens collectively seem to call in sick toward the end of March.

The ludicrous and insulting comments from NCAA President Mark Emmert at a press conference in Los Angeles in 2011 show just how little the organization thinks of its prime source of profit.

“They are student-athletes. They are not our employees, they don’t work for us,” Emmert said. “They are our students, so we don’t pay them.”

It boggles the mind. It is easy for Emmert to say these insensitive comments when he is leaning back in his chair, watching the athletes perform on television.These are the same players who were the catalysts for the growth and popularity of college basketball and, in turn, generated revenue for these schools.

Student athletes are employees, and probably the best employees for the NCAA. Outside of what they do on the court and field, athletes are making money for retailers and the university just by being popular and likeable.

According to IMG, a marketing and brand management company representing the NCAA, consumers spent $4.5 billion on college merchandise in 2011. This merchandise includes videos games, hats, jerseys and other forms of clothing.

The NCAA is using the age-old excuse that these players are amateurs and don’t warrant financial compensation.I must be confused, because the last time I checked, amateur athletes didn’t play in multi-million dollar stadiums or have their faces on the cover of widely popular video games.Amateur basketball is what you see at the rec center on sunday mornings, not on national television in front of sold out crowds.

It’s simple. Players are being exploited while the fat-cats at the NCAA are watching the cash flow in and coaches are seeing their salaries exponentially increase. According to Forbes, in 2006, 42 major college football coaches made at least $1 million. Today, those same coaches make at least $2 million and 13 of them are receiving a base salary of more than $3 million.

According to the same report, average annual salary for head coaches at major colleges is up 12 percent from last season and up 70 percent from 2006. What does this all mean?

It means that the rich are getting richer because of lucrative television deals while the players are left by the wayside with no slice of the pie.

I believe in a system that pays athletes royalties for jersey sales or anything else that has their name or likeness on it. The amount of time and effort that these student athletes put into their respective sport requires some sort of compensation, especially when their name is on merchandise that is being sold in such high amounts.

Instead of being evenly distributed among all college athletes, it should work in a system that reimburses players based on royalties and salaries that are proportionate to the amount of revenue that particular sport or team brings to the school.

College athletes need to be compensated for sacrificing their time and pouring their livelihoods, blood, sweat, tears, and time into a season which pays them nothing.

The occasional victory and notoriety around campus is a great feeling but their commitment goes beyond the games and it’s about time the NCAA begins to appreciate that by giving them the financial stake they deserve.