Student hopes to use math to explain how biological cells function 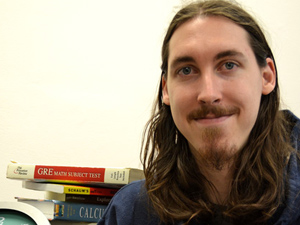 Students may not appreciate their math education, but systems involving the subject are everywhere.

William Sherman, a mathematics graduate student, notices that security systems, including entering a PIN at an ATM, are based off prime numbers, which can only be divided by one and itself.

“The only people who can decompose (the systems) are the ones who created them, like the banks,” he said.

By understanding this, it can allow people to feel safer about entering a PIN at the bank, Sherman said.

Being a math major has also affected the way the graduate student views issues on a daily basis, particularly when it comes to solving problems.

“Another problem comes along and I don’t get overwhelmed. I take an analytical approach: take a step back, look at the problem, establish the situation and then decide what I can change to make things easier,” he said.

In addition to being a graduate student, Sherman is a teacher’s aid in a class called mathematical ideas, where students learn philosophies in math.

“It’s hopefully linking ideas in mathematics to different majors,” he said. “There are certain ideas that math teaches that every student should know, such as analytical thinking and comprehension.”

Sherman is also trying to teach his students and the biology department that math matters. He is conducting his own research with mathematics professor Ramin Vakilian to explain how cells work with equations.

They take biological (cells) and model them mathematically, and are currently looking for someone in the biology department who can help them test out their models.

“A lot of people focus on mathematics in business, or economics (and take that to) the stock market. Then a lot of people go into mathematics and engineering or physics. Those go hand in hand,” he said. “But the problem is there are not a lot of departments in the U.S. that even offer a major in mathematical biology.”

He has been told that he is attempting to do the impossible because cell systems are too complex to use simple math.

“There is a prevailing perception in the biology department that this can’t be done, but the problem is they don’t know the type of math that we are doing and we don’t know all the biology that they are doing, so there has to be a collaboration,” Sherman said.

The graduate student’s main passion is research, and he said he spends much time searching for research relevant to his theories. He also has four other projects he has been working on intermittently for the last two years.

“At least one point during the day, I think about something mathematical. There is always some kind of problem that I am trying to figure out,” Sherman said. “Usually I will be in a mood to do my research and I’ll spend four hours doing it.”

When he is not researching and doing course work, he likes to watch television and movies, but he will never be found reading a book.

“I don’t read books. I do research on articles and do solutions in the back of old math textbooks, but to me, that’s not reading,” Sherman said.