Women’s doubles tennis team talks about synergy on the court 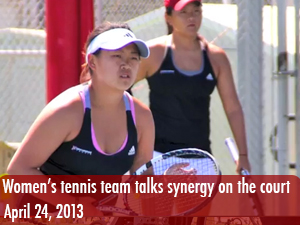 In the game of tennis, sometimes a little drive and determination is just what a team needs to prevail against a tough competitor. Luckily for the CSUN women’s tennis team, its top two doubles pairings are chock full of both.

Doubles set the tone for matches between schools. Comprised of three doubles matches to open up play, whichever school wins two of the matches receives a point towards their overall total. Followed by six singles matches, worth a point each, a total of four points is necessary to win. A successful doubles pairing can give one team momentum throughout the day.

“It adds a little bit of cushion,” said Sabrina Man-Son-Hing, a senior on the No. 1 doubles team and a 2012 All-Big West Doubles First Team selection. “If you can just get the early point you feel a little bit more relieved. Especially when you’re playing better teams, you need to have an early lead in the match.”

The No. 1 doubles team started the season incredibly strong with a 13-match winning streak. Man-Son-Hing and senior Anna Yang have been playing doubles together since last summer, and tennis has played an important part of both of their lives since they were kids.

Man-Son-Hing, a psychology major, said both her father and grandfather played tennis. Her father played for UC Irvine and toured for a short time after he left school. Yang’s father started her with badminton, but she graduated to tennis by the age of seven and hasn’t looked back since.

CSUN’s No. 2 doubles team are no slouches either, finishing the regular season with a 12-8 record, pairing up junior Lorraine Cheung and senior Maria Pistalu.

Pistalu, who is graduating with a major in biology and minor in chemistry, is originally from Germany. Her tennis career started at the age of 5 when her parents were looking for something to occupy their very active little girl.

For Cheung, a 20-year-old accounting major, tennis was a family tradition. Her dad was a coach and she was given the chance to start swinging a racquet around the age of 6, unable to stop since.