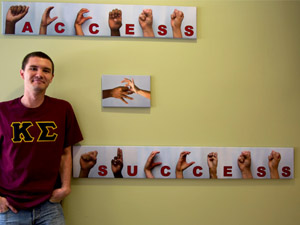 For Spencer Logan, school had always been a struggle.

He always had difficulty memorizing information in subjects like physics, history and math, and it was difficult for him to retain information.

But he found his passion in American Sign Language (ASL).

“I’m a very visual learner,” said Logan, 23, a deaf studies major. “I was able to pick up sign language very easily because it is a completely visual language.”
He began taking classes in ASL in the spring of 2006 at Santa Barbara City College, but soon stopped a year after.

“I realized that Santa Barbara wasn’t really the environment for me to really progress my sign language skills, so I wanted to wait until I transferred to CSUN to get my signing ability up,” Logan said.

He moved to the Los Angeles area and transferred to CSUN in August of 2011 where he enrolled in the university’s deaf studies program. Here, he met a group of deaf students that he became comfortable working with.

“Interaction with them really helps me build my own communicative skills and learn about the culture and become a better interpreter,” Logan said.

The deaf studies major also practices signing in his fraternity, Kappa Sigma. The Greek multicultural organization on campus has brothers who are hard of hearing and/or are also majoring in deaf studies. Participating in the fraternity has enabled him to socialize and network with other Kappa Sigma chapters throughout the United States.

“I would encourage anyone to join Greek life because you get to meet so many different people and do things like the national conference,” he said.

Logan holds much interest for the art of signing. He hopes to become an interpreter for the court system, a passion he has and can’t explain.

“I just have always found it fascinating,” he said.

If he doesn’t get accepted, Logan will change his major to ASL Literature, which goes in-depth in examining literature written for deaf people.

“There’s a lot of culture involved in the deaf community that a lot of people don’t know about,” Logan said. “ASL literature is a work of art that a lot of deaf authors have compiled.”

The student has found inspiration from professors as well, such as Shoshannah Stern, who teaches Introduction to Deaf Studies. Stern is one of Logan’s favorite professors.

“With Spencer, I think I knew his name after the first week or so,” Stern said. “He never failed to come to class prepared, and I could always count on his hand shooting up during every pause. His questions were always thought-provoking and on point.”

In addition to attending school, Logan works two jobs: one at a restaurant in Bel-Air and one as an on-call banquet server in Beverly Hills.

Handling his jobs and studying is the biggest challenge he currently faces. The deaf studies major has learned that balancing his life is essential, and he took the opportunity to use the resources and events that CSUN offers so he could earn better grades.

“It made me capable to get an outstanding GPA after that,” Logan said. “I found that CSUN is an amazing campus with a lot of wonderful resources and really passionate teachers.”