Tennis duos team up for doubles 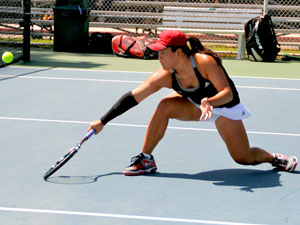 In the game of tennis, sometimes a little drive and determination is just what a team needs to prevail against a tough competitor. Luckily for the CSUN women’s tennis team, its top two doubles pairings are chock full of both.

Doubles set the tone for matches between schools. Comprised of three doubles matches to open up play, whichever school wins two of the matches receives a point towards their overall total. Followed by six singles matches, worth a point each, a total of four points is necessary to win. A successful doubles pairing can give one team momentum throughout the day.

“It adds a little bit of cushion,” said Sabrina Man-Son-Hing, a senior on the No. 1 doubles team and a 2012 All-Big West Doubles First Team selection. “If you can just get the early point you feel a little bit more relieved. Especially when you’re playing better teams, you need to have an early lead in the match.”

The No. 1 doubles team started the season incredibly strong with a 13-match winning streak. Man-Son-Hing and senior Anna Yang have been playing doubles together since last summer, and tennis has played an important part of both of their lives since they were kids.

Man-Son-Hing, a psychology major, said both her father and grandfather played tennis. Her father played for UC Irvine and toured for a short time after he left school. Yang’s father started her with badminton, but she graduated to tennis by the age of seven and hasn’t looked back since.

CSUN’s No. 2 doubles team are no slouches either, finishing the regular season with a 12-8 record, pairing up junior Lorraine Cheung and senior Maria Pistalu.

Pistalu, who is graduating with a major in biology and minor in chemistry, is originally from Germany. Her tennis career started at the age of 5 when her parents were looking for something to occupy their very active little girl.

For Cheung, a 20-year-old accounting major, tennis was a family tradition. Her dad was a coach and she was given the chance to start swinging a racquet around the age of 6, unable to stop since.

The doubles pairings ability to get an early lead is no accident for the Matadors. These four young athletes have learned how to listen and react to each other with split-second accuracy. Spectators who watch closely can catch what appears to be entire unspoken conversations passing between them with one quick, significant look.

“It feels comfortable because she’s one of my best friends and we’re playing well together on the court,” Man-Son-Hing said. “We’re honest with each other and we can communicate well. It’s fun.”

For Yang’s part, she tries to stay focused on the game and her teammate Sabrina.

“I think our communication is really good and we get along with each other,” said Yang, who was awarded with an Honorable Mention All-Big West Doubles selection in 2012.

Spend a little time with Pistalu and Cheung and it’s easy to see how these two friends compliment each other on the court. Pistalu’s spark and energy are balanced by Cheung’s tenacity and calm.

Like one of her favorite players, Roger Federer, Cheung tries to maintain a serene visage on the court, even if she’s having some pretty strong feelings about the match. Put together, they form a strong duo that can recover from any setback.

“I think that’s our main strength,” Pistalu said. “That we never really give up and we can always come back.”

Pistalu and Cheung’s nine-game winning streak at the beginning of the season came as a welcome surprise to everyone, and was complemented by Man-Son-Hing and Yang’s 13-gamer. While the players said they all knew they got along and enjoyed playing together, no one anticipated such amazing success.

“I knew we had strong doubles teams but I could never have expected that kind of excellence,” said head coach Gary Victor, in his 15th season at CSUN.

Attributing the girls’ success to hard work, motivation and some great chemistry, Victor admits that while it doesn’t always guarantee success on the court, it has worked out well for these women.

Doubles matches are very different from singles, Victor explained. In a singles match, the players can stay at the back of the court, far away from the net, and points can take much longer. With four players, the speed of play increases and there is more need to be aggressive and approach the net.

“They love the challenge,” Victor said. “They love the opportunity to lead a team and they’ve done the things necessary to be successful on and off the court.”

These athletes possess drive and determination off the court as well. Man-Son-Hing plans to attend law school after she graduates while Yang intends to go to nursing school. Both Pistalu and Cheung have qualified for the athletic honor roll or “Varsity N”, earning at least a 3.2 grade point average over two semesters.

Coach Victor summed it up, “They are very much ‘can-do’ and really, what more can a coach ask for?”