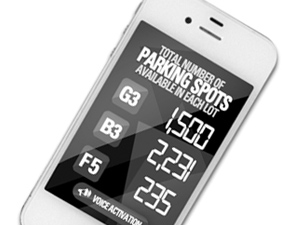 Students will soon have a tool to help them find parking spaces at CSUN.

A new mobile application has been developed that will help students as they search for a parking structure before they even get to campus.

Graduate student Max Aram has been working with groups all over campus since 2011 to develop a smartphone application that will tell students where to find the most open parking spaces in the parking structures.

The development stages are almost complete and testing will begin in the next few weeks. If all goes smoothly, students could be using the new technology by fall semester 2013.

The student fee advisory committee “spoke out vigorously” in favor of it last year, Crandall said.

“What’s the saying, ‘I got my parking pass, but it’s more like a hunting pass?’” Crandall said.

In a special meeting held on Aug. 31, 2012, the board passed a motion to approve a resolution encouraging the university president and vice president to approve the Smart Parking Project.

Sensors have been installed at entrances and exits, as well as some other strategic points, in parking structure B5 according to Aram, who is also the project manager.

When cars pass the sensors, the information is sent through a series of servers and other equipment. By counting how many people enter and exit, the software knows how many parking spots are left in the structure.

Students will be able to view the information through an application on their smartphones once they arrive within a few miles of campus. Developers have included a voice activation feature so drivers do not have to take their eyes off the road while looking up parking information.

Aram was inspired to do something about the parking situation on his first day as a grad student at CSUN. The manufacturing systems engineering student said he spent an hour, driving around two parking structures and a few parking lots, trying to find a space. He ended up leaving his car at the Ross parking lot on Reseda Boulevard.

Talar Alexanian, an Associated Students upper division Senator and a commuter student herself, said she hopes the parking app will give students a better perception of CSUN.

“I know one of the bigger problems for students who commute to campus is the issue of parking, especially at the beginning of the semester,” she said. “I think it will definitely make the transition for new students coming to campus easier, as well as making the whole campus experience a more enjoyable one once they get here.”

Many people have added their expertise to the development of the application. Aram has been working closely with another grad student, Norvan Gorji, who has contributed many hours as a programmer on the project.

There have also been weekly meetings with faculty and staff groups such as the CSUN police department and the Institute for Sustainability, all adding their experience to help refine the system over the last year.

If the feedback is positive, the app could be expanded to cover other parking structures and parking lots across campus, Aram said.

Aram said he hopes this project will leave a legacy for other students by cutting down on the time they spend looking for spaces while reducing the amount of gas people have to use driving around campus looking for a parking spot.

Some students are looking forward to the new app while others are not sure.

Luke Guastaferro, 22, senior urban planning major, said he thinks he would use the information to cut down on the time he spends looking for a parking place.

Sergi Corvajal, 23, also an urban planning major, said he probably would not use the app.

“If you come to school Monday through Friday, you should already know where to look,” he said.

Final testing of the program is underway now. If everything goes according to schedule, the new parking app will be tested by a small group of students over the summer. It will then go live for all CSUN students in the fall of 2013 in the B5, B3 and G3 parking structures.