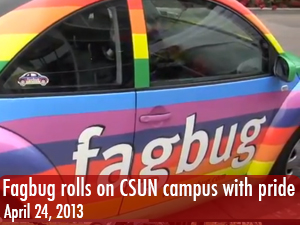 Erin Davies, Fagbug owner and LGBTQ activist, and Sarina Loeb, USU Pride Center and LGBTQ Initiatives Coordinator and organizer of the Fagbug event, stand beside the Fagbug, which has traveled over 250,000 miles across the U.S. to bring about awareness on LGBTQ issues. Photo Credit: John Saringo-Rodriguez / Daily Sundial

Erin Davies, a victim of vandalism who had the word “fAg” spray-painted on her Volkswagen in Albany New York in 2007, chose to turn such a homophobic act into a statement that she would soon share with the nation and receive overwhelming acclaim instead of paying to remove it.

Fagbug and Davies’ work are known by many as “activism on wheels.” She and her car made a pit stop to CSUN on Wednesday, April 24, for a lecture and Q and A organized by the USU Pride Center.

“I hope that the campus community will learn more about the issues that the LGBTQ community faces, such as discrimination and hate crimes and that students will feel empowered and think creatively when negative situations arise,” said Sarina Loeb, USU Pride Center and LGBTQ Initiatives Coordinator.

Davies speaks on behalf of the LGBTQ community and sheds light on the daunting prevalence of hate crimes among this community throughout the United States and Canada.

“You can take in a negative experience and turn it into a positive, a setback could turn into an opportunity,” Davies said.

Since Davies began her journey with Fagbug, she has found both negative and positive notes on her windshield, but the positive ones outweigh the number of negative ones. She has been acknowledged by strangers as being an inspiration and a hero.

Erin Davies visits CSUN to talk about her experiences traveling across the U.S. with the Fagbug, her Volkswagen bug that was vandalized with the word “fAg.” She speaks at colleges, high schools, conferences and radio stations about hate crimes and prejudice regarding the LGBTQ community. Photo credit by John Saringo-Rodriguez / Daily Sundial

“I love that people take the time to write and leave notes. I don’t see myself as a hero, I just put myself out there to be visible and to educate people,” she said.

Davies hopes that people that she speaks to think twice before vandalizing other people’s property and teaches tolerance by denouncing hate crimes and acts of discrimination.