Griner has no place in the NBA 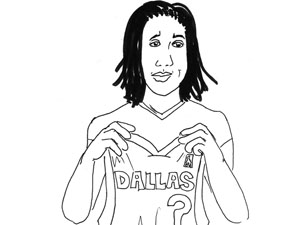 Recently Dallas Mavericks owner Mark Cuban told reporters that he would consider drafting  University of Baylor senior center Brittney Griner in the second round of this year’s NBA draft.

Cuban asserted that “if she is the best on the board, I will take her” and that he had “no problem whatsoever” in inviting her for a chance to try out for the Mavericks summer league team. Cuban also stated Griner has huge marketing potential because of the excitement to see how she would perform and “(t)hat’d sell out a few games.”

While it’s an interesting idea to draft a competent female player into the NBA, Cuban’s statement seems more like a publicity stunt as opposed to a meaningful stance about women competing in major sports alongside men. The end result is a shame for a discussion that needs serious consideration.

After Cuban’s comments, a slew of people associated with the game of basketball came out to give their two cents on the issue, including Griner who tweeted, “I could hold my own. Let’s do it.”

There were supportive responses like Miami Heat forward Shane Battier who stated “(t)here’s no doubt that in our lifetime, there will be a woman NBA player. I don’t think it would be out of the realm of possibility that [one day] we’ll see a female LeBron. You could be thest skilled player in the world that the women’s game has ever seen, but that won’t cut it in the NBA. She’d have to be a physical specimen.”

There were also negative reactions like that of The University of Connecticut women’s basketball coach Geno Auriemma who stated “It would be a public relations thing, a sham. To think a woman could compete to the level of [NBA players] is ludicrous.”

A similar response was shared by former NBA player Charles Barkley who stated during a radio interview on the “Dan Patrick Show” that “(Griner) can’t play against guys. I mean, you’re going to go at her, probably aggressively, cause you’re offended that she’s trying to play against you cause it’s kind of an insult to you. Ninety to 95 percent of those guys who play in the summer league are never going to play in the NBA.”

Barkley also agreed with Auriemma in that this move was made by Cuban for the sole purpose of publicity and not on the fact that he believes women can play competitively against men.

Like Barkley and Auriemma’s reactions to Cuban’s remarks, the move does have the smell of a publicity stunt rather than attempting to see if a woman can compete in the NBA.

Although Cuban is an outspoken and at times a very controversial owner, it ultimately comes down to the fact that he is an owner of a multi-million dollar men’s professional basketball team who is trying to maximize his money.

When Cuban purchased the Mavericks back in 2000, his goal like any other NBA owner is to not only win a championship but to make profit off his players. The NBA is a business in its own sorts with its players as the product and the fans as the consumer.

So you don’t think Cuban’s statements have a little bit to do with marketing the hell out of this potential move and trying to make as much money out of it as he can?

Cuban is more concerned with making money. Why do you think he became an owner of an NBA franchise? The idea of bringing Griner, who is 6-foot-8 and dominates college basketball, to the NBA only makes sense from a business perspective, as well as public relations.

As Cuban stated, it would “sell out a few games.” He is well aware of the marketing potential this move could bring to the NBA and more importantly to the Dallas Mavericks franchise. He wants to make as much money as he possibly can and this move will do that  even if it is not successful.

Griner may be a woman who can dunk and has dominated the college level of basketball, but trying to transfer that ability over to the NBA where there is a vast amount of physicality and strength needed to compete is a stretch and Cuban definitely knows that is the case.

The last time a woman attempted to play in the NBA was in 1979 when former UCLA Bruin Ann Meyers tried out for the the Indiana Pacers.

There is no question whether a woman can play the game of basketball, but there is a huge difference in the women’s game compared to the men’s. The women’s game is more a “below the rim” type of play where there is more of an emphasis on teamwork and finesse. The men’s game is “above the rim,” because men have the ability to dunk. They are also much stronger and more athletic than women.

These differences in style between the men and women’s game make it hard to believe that he is serious in trying to bring a woman into the NBA. It would be a very difficult task for Griner to match the physical play of the NBA on a nightly basis. Her height at 6-foot-8 would put her at the average size of a small forward in the NBA, which would be drastic move for her from playing the center position. It would  require her to learn a whole different skill set to compete.

I am all for drafting Brittney Griner or another woman basketball player into the NBA if it is for the sole purpose of seeing whether they can handle the physicality of the NBA game, but in Cuban’s, case, he is clearly more interested in seeing whether he can sell out games and make profit out of it. Consequently, it makes it hard to justify and celebrate his move.

I think the idea of women in the NBA is one that may grow legs in the future, but right now the men’s game is too physical on a nightly basis and would put more wear and tear on a woman’s body.

As for Cuban, his only concern with this possible scenario occurring is to make money. If he were to draft Griner or invite her to the summer league team and she was not able to make the team, do you think Cuban would really care?

He would probably go on to state “well it was fun while it lasted.”