Baseball: Matadors on wrong side of no-hitter 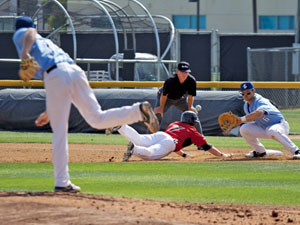 Loyola senior starting pitcher Matt Florer threw a no-hitter against CSUN, only the second no-hitter in Lions school history; the other coming in 1980.

Facing four batters over the minimum, Florer was a little inconsistent at times on the mound, walking five Matadors and taking 134 pitches to complete the game.

Coming into the game, Northridge had compiled 23 runs and 35 hits in a three game series against Hawai’i the weekend before, but were unable to put anything together against Florer. CSUN was unable to advance a runner past second base against the Lions.

Loyola got on the board in the third inning after a fielding error by senior shortstop Kyle Attl with runners at first and third, scored one. A sacrifice fly two batters later would put the Lions up 2-0 against Northridge.

The Matadors had no answer for Loyola as they went down quietly and in order through the first five innings, with the only runner reaching called out in a double play.

Tacking on another run in the fourth and two more in the fifth, Loyola scored their final run on a wild pitch by junior pitcher Harley Holt, firmly putting the game out of reach at 5-0.

Northridge was finally able to threaten and get a runner to second base in the eighth inning against Florer. Leading off the inning getting hit by a pitch, sophomore catcher Alexis Mercado advanced to second base as redshirt sophomore left fielder Kyle Ferramola walked.

The rally would be shut down there though, as the next batter flew out to center field and the Matadors then grounded into their second double play of the game.