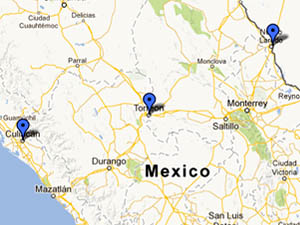 Syria, Iraq and Egypt are nations who are noticed by the media due to the violence and turmoil their citizens have suffered. But the United States neighboring country Mexico has also been going through a war that has cost thousands of lives.

“The murders of women is almost all you hear about, but that is just 10 percent. I never knew that,” said Mary Zeigler, freshman electrical engineering major. “My class is reading ‘Murder City’ by Charles Bowden and that book was very eye opening because I knew very little.”

With more than 30 students in attendance the panelists shared their knowledge of how the Mexican government is using little to no effort to fix the issue.

“President Bush and Clinton said raising wages in Mexico would bring prosperity here and end illegal immigration. This is like believing in ‘Puff’ the magic dragon. It’s a failure,” Bowden said. “Nothing is getting better, it’s getting worse.”

“Any kind of business, any kind of person was a target for kidnappers,” said photojournalists Julian Cardona. “In most of the cases those behind the kidnappings and extortions have been law enforcement agent: the army, the federal police, the state police, the municipal police.”

The event ended at 9 p.m. and the panelists stayed 20 minutes after the event to talk with students.

“All this violence has been a consequence of the globalization of (the city of) Juarez and now the country is replicating the same thing,” Cardona said.