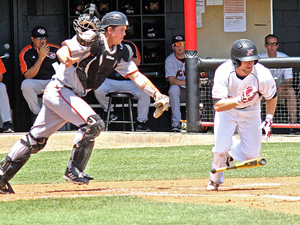 Freshman pitcher Calvin Copping started for Northridge and held Pacific to a single run in his eight innings pitched. Copping tied his career-high with six strikeouts on 108 pitches, including 70 strikes.

“I think the difference between the pitching today was Calvin (Copping) making an adjustment in the first inning…get some ground balls, outs and get out of the inning,” said head coach Matt Curtis.

Dominant back-to-back pitching performances by the Matadors after Friday’s complete game 6-1 victory by Jerry Keel, has limited the Tigers to three runs in the series. Keel has allowed just one run in 20

Coming out strong in the first inning, Northridge struck for three runs quickly on an RBI groundout by redshirt junior first baseman Joshua Goossen-Brown. Singles by redshirt sophomore right fielder Chester Pak and sophomore catcher Alexis Mercado gave CSUN all the runs they would need for the game.

“Their guy threw a really good game and he just struggled early and fortunately we made him play early and that ended up being the difference,” Curtis said. “He settled in and really hand cuffed us for the next seven innings. We were able to get those runs to answer their run.”

After allowing Northridge its three-run lead, Tigers freshman pitcher Jake Jenkins found a groove and stopped the Matadors from scoring for the next six innings. The Matadors would not record another hit off Jenkins until one out in the bottom of the sixth inning.

The Tigers eventually tagged Copping for a run in the third inning. Getting a runner on first due to a throwing error with one out, Pacific advanced the runner to third on a single to left center. A groundout fielder’s choice scored Pacific’s lone run against Copping.

Each team was held scoreless in the fourth, fifth, sixth and seventh innings as it became a pitcher’s duel.

A lead-off double in the eighth put a runner in scoring position for the Tigers down 3-1. Two consecutive groundouts scored the last Pacific runner of the game.

A leadoff single by Goossen-Brown and a sacrifice bunt to move him to second ended Jenkins’ day and brought sophomore Bryce Lombardi on for the Tigers. Mercado recorded his second RBI of the day on a single to left field and advanced to second on the throw home. Advancing to third on a wild pitch, Mercado scored after a sacrifice bunt, putting CSUN up 5-3.

“Having confidence in myself has helped me a lot,” said Mercado, who went 3 for 4 with two RBIs. “I’ve been seeing the ball well out of the pitcher’s hand and just putting a good stroke on the ball.”

Goossen-Brown’s run in the eighth aided his own effort heading into pitch the top of the ninth.

“I’m used to going from a hit to the mound. I don’t even think about pitching until I go into the bullpen,” Goossen-Brown said. “I mean I try to separate the two.”

Shutting down the Tigers in the ninth, Goossen-Brown threw 12 pitches to four batters and recorded his seventh save of the season.

“A three run save is a little easier than a close one run,” Goossen-Brown said.

Getting injured senior left fielder Cal Vogelsang back from a broken wrist in Friday’s game, Vogelsang picked up where he left off. After going 3 for 4 with three RBIs on Friday, Vogelsang went 0 for 3 on Saturday, but did drive in a run.