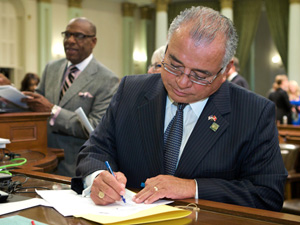 California State Assemblyman Rocky Chavez has proposed a bill that would grant in-state tuition to recently discharged military members even if the student is not a current California resident.

Chavez, representing the 76th district, passed AB 13 through the Assembly’s Higher Education Committee, which would allow recently discharged, released and retired service members to pay in-state fees for any CCC, CSU and UC school without being a current resident.

“The VRC is supportive of access to higher education to veterans and support them during their pursuit of a degree,” said Veteran’s Resource Center Coordinator Monteigne Long.

“These men and women are not given the option to move to California and establish residency prior to being discharged,” Chavez said in a press release. “It is unfair to penalize them for their residency when they have no choice in the matter.”

According to a fact sheet from Chavez about AB 13, veterans using the Post 9/11 GI Bill pay the difference between in-state and out-of-state tuition fees. The fees are a significant financial problem for veterans as it can cause them to take a year off school to establish California residency. This also impacts the eligible time they have to use their GI Bill.

“Offering in-state tuition will encourage veterans to move to California where they will contribute to both our local and state economies,” Chavez said in a press release. “Without this incentive, these men and women will likely choose schools elsewhere, taking their time, talent and skills with them.”

Estimates show that each veteran attending school full time and using their GI Bill would bring a minimum of $20,000 in federal money per year to California. Nineteen other states currently offer similar residency waivers, according to a press release on AB 13.

Brooke Converse, a UC spokesperson, said that the university has no comment on the bill, but they continue to follow it in the legislative process.

CSU Web Communications Specialist Stephanie Thara said that the CSU also has no comment on the legislation. They are still analyzing the impacts of the bill, but are supporters of veterans in general.

“We are big advocates of providing access and service to veterans and the highest quality of higher education,” Thara said.

Selma Mayhew, assistant director of admissions and transfer evaluations, said that she would be shocked if the CSU did not support the bill.

“Will the CSU embrace it? Absolutely. The CSU is proactive for military and the veterans,” Mayhew said.

Mayhew said that the applications process for Spring 2013 is a testament to that because most CSU campuses were closed to applicants except veterans. She said the budget cuts and over enrollment were the cause for this.

The admissions director said that according to Title V of the education code priority for admissions is veterans, transfer students then freshmen.

“We appreciate and approve of our veteran population,” Mayhew said.