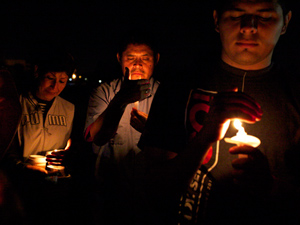 Students, families and friends gathered in north field on campus Saturday and Sunday to raise money for the American Cancer Association at the annual Relay for Life.

CSUN’s Colleges Against Cancer, a group of about 40 students who organized the event, had booths representing different cancers, carnival games, live music and a candlelight vigil honoring cancer survivors and those who died.

Students, friends, family, survivors and different sororities and fraternities created teams and walked laps around the field from 10 a.m. Saturday until 10 a.m. Sunday.

“(Relay for Life) is something that feels good to do,” said Stefanie Ventura, president of Colleges Against Cancer. “And to see people who feel the same way is a reward in itself.”

The group hoped to surpass their goal of $50,000 for this year’s event. Each booth, which represented different cancers such as bladder and thyroid, had activities and games to help raise money.

Relay for Life was hosted in the north field this year to handle a larger capacity of people. Relays before were hosted in front of the Oviatt Library. Several organizers welcomed the change in location.

“There are differences between the Oviatt and north field,” Ventura said. “You get to be more comfortable in the field, but you lose the domain of the Oviatt that’s so well-known.”

This year more participants have joined the cause and created more booths to add to the representation of other cancers, which is another goal the group focuses on.

One booth, surrounded by stuffed animals, focused on thyroid cancer and offered a fortune wheel with several prizes donors could win.

Julie Vezina, 30, senior psychology major and captain of the booth, became involved in Relay for Life because cancer had affected her family and a friend.

She enjoys coming to the Relay events to help raise funds for cancer research and is glad she can be involved with the campus community.

“I enjoy the camaraderie here,” she said. “I’m a night student so I don’t get to experience much of the campus events.”

Vezina’s friend, 23-year-old Diana Varillas, is involved in the Relay for the first time. She wore a purple T-shirt to show she is battling thyroid cancer.

“Technically, I’m not a survivor yet,” she said. “I’m still not in remission and I’ve gone through five surgeries for infected lymph nodes since the removal of my thyroid.”

Varillas was diagnosed with cancer at age 14 and has gone through several surgeries, radiation and chemotherapy to combat the disease. The event helped her realize the campus community can come together.

“The spirit and the amount of creativity has been my favorite part (of the Relay),” she said.

At 10 p.m., a candlelight vigil was held along with a moment of silence as all participants walked around the field with candles. Survivors also went on stage to recite poems and tell their stories.

Miriam Hoya, 23, sociology and Central American studies major, had attended the event her freshman year and did not come back until this year. She had lost her friend, who was only 22, in October 2012 to salivary gland cancer. The unity at the event, specifically during the vigil, left a lasting impact on her.

“I would love to keep coming back,” she said. “Especially because it’s nice to see the CSUN community and everyone come here for one cause. It’s amazing to see everyone just here for an entire day.”

Penelope Lopez, 20, junior psychology major and event chair for Relay for Life, has been involved with the event for three years, but has been to different Relays for seven years. Her cousin, who had stomach cancer, became a survivor earlier this year.

“It’s been nice to be able to grow with this event,” Lopez said. “It’s a great way to give back and I’m doing it for my loved ones.”