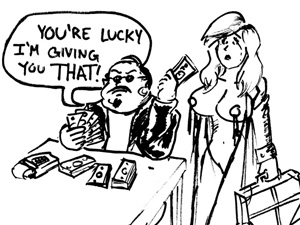 When I tell people that I worked at a strip club, the response is usually predictable and uniformed: “How cool, how awesome, how great it must have been working there, seeing tits and asses all day long.”

They’re anxious to hear about the details of naked women, happily prancing around, men throwing bills at their sexy, gyrating, sweaty and glistening bodies. There is a look of stark confusion on the faces of people when I tell them that my nearly decade-long stay in the adult retail and strip club industry were some of the darkest, saddest moments of my life.

A job, as is now, was hard to come by back then. I had just quit my FedEx job. I was doing poorly at Los Angeles Valley College, so I needed this job, however strange, however wrong. And for whatever reason, I excelled at it. I was promoted to assistant manager and then eventually manager at that location and other stores throughout Los Angeles and even in Oregon. My upward progression eventually landed me the opportunity to manage a strip club in the San Fernando Valley.

The place wasn’t your typical strip club. The front of the club was an actual adult store with toys, oils, lingerie and DVDs. In the dimly-lit back was where the actual club was. There was a marble-and-mirror stage which featured topless and bikini dancers and curtained-off private lap dance areas (also known as VIP Rooms). But in addition to this, there were rooms where dancers would perform full-nude private “peepshows” for customers, separated by one-way mirrors.

Before I started working there, the owners gave me simple advice: treat the women like shit; don’t show empathy or compassion; it’s a weakness and they will eventually take advantage of you. They took me to another nearby strip club where we met with club owners and managers. I was told to listen and take note of the advice and direction from the managers, which only reinforced notions of domination, sexist male hierarchy.

One of my first tasks as a manager was to get rid of most of the dancers and start anew with “better-looking women” and a contract that would favor a higher percentage to the club. All the dancers in all strip clubs, almost without exception, are technically not employees. They sign contracts with the club as independent contractors.

From each lap dance and peepshow, the dancer had to pay a percentage to the club.

Typically, it was anywhere from 20 percent to 50 percent. If that wasn’t bad enough, oftentimes during slow days we had more than 10 dancers from the morning or early afternoon till the evening, and only a handful of customers. Competition is a normal characteristic of a strip club, but when there is only four or five customers for hours at a time, dancers are forced to be more bold with their competitiveness. In these scenarios, many women would leave their shift with as little as $20. Sometimes, and I will always remember this, I would be approached by a nearly-naked dancer, eyes spilling over with tears, a strange sad sight, and complain that it wasn’t fair or right, for her to show her body off, rub laps, have her breasts groped—all this, all for $20.

But I remembered what the owners had told me. So I said, “Tough shit. If you don’t like it, you can find work at another club.”

It’s with shame that I type this, but it would be worse to pretty up my role in all this.

Sadly, this isn’t the worst memory I have from working at the club.

I remember hiring a new dancer. She was a very attractive Spanish-speaking-only Latina. I interviewed her. We discussed the contract, the percentage that she would have to pay toward the club each shift. She seemed unbothered about the high-percentage payable to the club. We made small talk, asked me my ethnicity, where I grew up, she talked about her kid, and then she asked me when and where would be the best spot in the club to perform oral sex on the customers.

I asked her to repeat herself. Maybe I heard incorrectly. She repeated herself and made a hand-and-mouth gesture. I felt great pity for this woman, and then I was angry at myself for being at a higher moral ground to exercise pity.

I wish I could say that this was a one-time occurrence, but sadly it was not. There were different moments that showed the dire economic or emotional state of many dancers. Only the minority of the dancers came from affluent backgrounds. Most were struggling single-mothers, predominantly Latinas and other women of color. Some were college students, stripping at night to pay tuition and bills. Some had alcohol and substance abuse problems. Some were caught having sex with the customers—which of course is illegal, but many strip club employees look the other way for the right price.

I understand my position—my privilege—then and now, as a heterosexual, light-skinned Chicano. I don’t pity these women (anymore). I don’t belittle them and claim that they’re one-dimensional victims. No, if a woman wants to become an adult club dancer, she should have that right. I understand this. But my criticism is on the, at-times, drastic conditions that drive some women to do an otherwise undesirable job.

From my limited experience, most of these women didn’t wake up and go, “I can’t wait to be a stripper!” It was for a lack of economic resources and opportunities.

After returning to college, I demoted myself at work in order to be part-time. Nearly immediately, I was fired for incorrectly filling out a shift report. A minor offense, but giving up my bloated managerial salary and benefits was an affront to the owners, and could not go unpunished. Nonetheless, I walked away relieved that I would no longer be part of the exploitative and sexist culture of strip clubs.

I walked away radicalized, seeing first-hand how women can be subjugated, how men are trained to treat them, and how divided we are in the workplace hierarchy. It was my first rudimentary feminist analysis.

I think the only way we can really defend strip clubs is if women had more control in the workplace. Get rid of the managers and owners that are conditioned in thinking that they have to psychologically subjugate women. Get rid of the independent contractor statuses. Put in place a workers cooperative where all profit is shared and distributed without having to factor in paying some greedy, slimy, hairy-chested legalized pimp or pimps (that doesn’t have to take off a single article of clothing for their paycheck).

This kind of strip club, I would support. Sadly, only one exists. The unionized Lusty Lady in San Francisco is part of Service Employees International Union, Local 1021. It prides itself as “the world’s only unionized worker owned peep show co-op,” and despite instances of economic hardships, they’re still around.

Personally, I don’t go to strip clubs anymore. I can’t bare the idea of giving my money to a club—let alone any place—that treats its workers like second-class people. This is my choice. I certainly don’t advocate that all strip clubs be boycotted, but rather call on men out there to think critically about what they’re perpetuating as consumers.