CSUN students experience a taste of NYC at Matador Nights 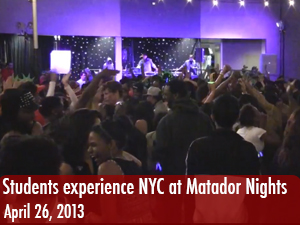 The University Student Union was filled to capacity Friday night as Matador Nights kicked off with more than 2,700 students filling Plaza del Sol.

Live music, games and food were part of the New York themed party. The atmosphere was lively and energetic. Students walked around wearing Statue of Liberty hats, showing off ‘I Heart NY’ glitter tattoos.

CSUN’s Hip Hop Dance Club made appearances on the dance floor throughout the night. The 10 members danced to get students excited and to spread the Matador Spirit.

“We’re just here to try to have a good time with everybody and to cheer people up and make them forget about their problems,” said Rene Recinos, senior psychology and kinesiology major.

Caricature artists sketched animated pictures of student faces. There were also two Coney-Island carnival-style rides, the ferris wheel and the round-up, were set up in the performance hall parking lot.

An Atlantic City inspired casino was set up in the Grand Salon where students played Texas Hold Em’ and Craps to win MataMoney and other gifts. Gamblers were entertained by students singing live karaoke on stage.

DJ Felli Fel, a Los Angeles based DJ known for working with artists such as 50 Cent and Akon, provided the music. He played a variety of music including “Started from the Bottom,” “Thrift Shop,” and “The Cupid Shuffle,” and kept the crowds entertained.

Inside the Northridge Center, students played arcade games and waited in line at the oxygen bar and ice skating rink.

Students were required to sign liability forms in order to receive wristbands allowing them to ice skate, ride the ferris wheel and round-up.

Popcorn, cotton candy and caramel apples were some of the snack foods available. The USU also provided pizza, hotdogs, drinks and snow cones.

A few students mentioned that they were dissatisfied with the DJ’s song choices.

Creole Green, sophomore undecided major, thought the songs were old and reminded her of high school.

“The DJ could have been a little better,” Green said. “But he kept it broad. There were different kinds of music.”

Alexis Roberts, SRC membership services assistant, danced to the spins of DJ Felli Fel as she directed people through the cotton candy line.

“I’m lovin’ it. Get paid, get to dance and get to see everybody dressed up,” Roberts said.

To savor memories of the evening some students took pictures at a digital photo booth. The booth provided props such as large bow ties, feather boas, sunglasses, grass skirts and more to make each picture fun and unique.