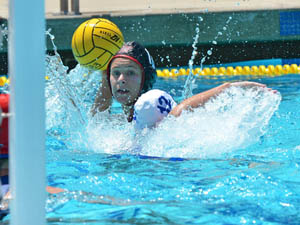 Led by junior attacker Lindsy Nelson’s three goals, CSUN held off a furious rally by the Gauchos to end the fourth quarter and lock up the victory.

“We knew we were facing Santa Barbara, which I think has one of the better goalies in our conference,” said head coach Dr. Marcelo Leonardi. “So I didn’t want to rush our offense because Santa Barbara capitalizes on the counter attack and transitions.”

The Gauchos jumped out to a quick lead over the Matadors, their only of the game, on a goal less than 45 seconds into the game. Northridge would answer back with two goals of their own and lead 3-2 at the end of the first quarter.

“We were coming out just looking to score early and hold it,” Nelson said.

Struggling to pull away and put the game out of reach in the first half, the Matadors went into halftime leading 5-3.

“I knew we were going to keep the game (close),” said sophomore goalkeeper Kiernan Davis. “It was stressful because I didn’t want them to go on a run, we saw (UC Santa Barbara) do it with UC Davis yesterday. They were down by four and came back to win.”

Given a penalty shot in the third quarter, the Gauchos were unable to convert against Davis, one of her ten saves in net.

“I think that Kiernan was the difference in the game,” Leonardi said. “She has been for the most part consistent but in the biggest stage she not only had ten saves but she had the penalty block which was a huge momentum shift for us.”

Extending their lead to four before the end of the third quarter, CSUN and UCSB traded goals back and forth to end the quarter with CSUN leading 8-4.

“I know they’re a fourth quarter team so once they started scoring we had to all calm ourselves down and realize we don’t need to score anymore goals. We just need them to stop. So that’s what we decided to focus on,” Nelson said.

Sophomore center Marisa Young and Doll locked down another two goals for CSUN less than half way through the fourth giving Northridge its largest lead of the game 10-4.

Santa Barbara scored two goals and a successful penalty shot to shrink CSUN’s lead 10-7 with 2:32 left in the fourth period.

Trying to come back with a power play, UCSB had two failed attempts at Northridge’s goal with 1:33 left.

“A big part of (our success) was the defense. If I have my defense in front of me where they’re supposed to be, it’s easier for me to get a lot of blocks and you know, play to my standards,” Davis said.

The Matadors beat the Gauchos in 2012 for a third place finish in the Big West Tournament.