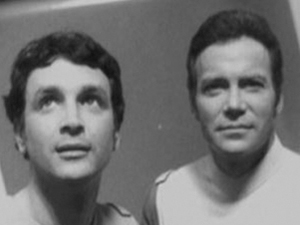 In 1967, when this campus was still called the San Fernando Valley College, student David Gerrold of the school’s theater arts program wrote and sold “The Trouble with Tribbles.” The script that started as his senior project went on to become one of the most popular Star Trek episodes to date.

After an extensive career that was started while still finishing up school, this CSUN alumnus has come full circle. Presented by the CSUN Theater Guild, Gerrold’s “Uncle Daddy Will Not Be Invited” is making its world premiere at the Little Theater in Nordhoff Hall this Tuesday, April 30.

As a screenwriter/ author, this is Gerrold’s first time writing/directing an on-stage performance. Working with the same department he studied for so long ago, Gerrold says it has been a real learning experience for both him and the students involved.

Daily Sundial: How did you come to study theater arts when you attended San Fernando Valley College?

David Gerrold: I was studying film over at USC and the money ran out so I came over here where it’s a lot cheaper, and there was no film department then and theater arts was the one part I hadn’t filled in; the acting and directing part. Coming over here we had this incredible department, people who understood acting and what was on the stage; I realized only after I was here how much I needed that piece to the puzzle. They were the best instructors possible. This department has always had high level of excellence.

DS: Going through school, what were your career goals?

DG: I wanted to write and direct (film). Writing actually came very easy to me because I’m what they call ‘high verbal,’ I just talk too much. But if you want to write you have to read, and if you read a lot you’re going to end up wanting to write. And I was a big science fiction fan, I was reading a novel a day, so by the time I hit college I had already read the entire backlog of science fiction magazine and novels, which at that time you could do because it wasn’t a very large library it was only maybe a couple thousand books. I started in high school, so I was pretty well caught up. Then this show called Star Trek comes on and I’m looking at it saying, “Well I know script-format because I learned that at USC, and I know story structure and I know science fiction and a lot of people don’t, that’s why we get such lousy shows, I’m going to submit an outline to them.” They liked the outline, they said come back for a second season and I sold them a script called “The Trouble with Tribbles.” That was my senior project here at school. It was a great way to graduate, turning pro.

DS: What’s it like being on this campus so many years after you’ve graduated?

DG: Well I’m not a stranger. I come to all the plays. The theater arts department does such great plays. You know, Cabaret, and just finished up Ragtime, I just love coming to the musicals. But coming back, it’s kind of like a homecoming. And part of it is “well this is new, I don’t remember this, why is this different,” but it’s a homecoming. It feels very comfortable to come back. And in a way, now I finally get to do my senior directing project because I didn’t get to do one 40 years ago.

DS: Why choose the Little Theater as the venue?

DG: Partly because I’m familiar with this campus, but mostly because I knew I could depend on this theater arts department to support it. The quality of the students here has been uniformly consistent. If it’s not good it’s great, the quality of the students. So I knew that I could do it here, test it in front of an audience before I had to go take it out anywhere else I could do it as a workshop. And really have the chance to see how it plays before there’s too much at stake. And also it would be a great opportunity for the students to work in a play or a kind of a venue that the theater arts department doesn’t normally do. This is not a normal college play.

DS: Tell me about the play, “Uncle Daddy Will Not Be Invited.”

DG: I would call it, quote unquote, “post-gay.” It’s about two men who are planning their wedding, but the fact that it’s two gay guys is almost irrelevant. It’s really about the relationship between two people who are trying to build a life together and there are secrets that neither has told the other, and as they unravel, as they dig into each other’s past they have to decide: “Is this really the person I want to live with?” so it speaks to a more universal theme. It’s “I did not know that about you, do you still want to marry me now?” It’s that question. They’ve been living together for five or six months, and they discuss how they got to where they are. It’s brutal and it’s raw but it’s funny at the same time, it’s very sexy. There’s a lot of laugh lines but here’s also a lot of hurt in it too, I wouldn’t even know how to describe it.

DS: You’ve written tons of television and novels, what about plays?

DG: This is my first play ever, so it’s been a learning experience. It’s probably been a little rough on the actors because we’re not working from a finished script so they’re getting line changes almost every night when I realize something or they realize something; they’ve suggested things. The script has gotten better because of working with the actors. You wouldn’t have that in any other play. These guys, Steven and Alex, are so good, they really are. You couldn’t ask for more passion, enthusiasm and commitment from a couple actors. We had a dozen guys audition. Really, all the guys who auditioned were good. They were very, very good, so it was a difficult choice. It wasn’t a question of who was giving the best performance because they each brought something sparkling, it finally came down to what two guys can I put next to each other and believe that they’re lovers.

DS: How do you think the audience will react?

DG: There are places in my mind where I can hear the audience is going to laugh. I don’t consider myself a comedy writer, but I do know when a line is funny and I’m not afraid to have people, even in the worst circumstances, making jokes. There are places where I’m expecting laughter, there also a couple places where I’m expecting enthusiastic chearing or applause, or a couple places of gasps of horror, so I’m probably going to sit in the back of the room and listen to the audience.

DG: Sometimes we just stop and have a conversation and I share with them the context. This is why this character is this way. It’s outside of the student experience. You graduate you go out in the real life, you go to clubs at night or you take a trip across country or you go here or you get involved in a family drama, you get life experience. And as you build up life experience you start to see things that you would have been naïve about. Sometimes we have conversations about ‘here’s the backstory of what happened with these guys,’ or ‘here’s why I did it this way,’ or ‘here’s why this joke is here’ and sometimes they share what’s going on with them. I encourage them to, I think they’re a little shy about that.

DS: Did Steven and Alex add anything to the characters?

DG: Absolutely. I would have been disappointed if they hadn’t. I was expecting, I was hoping I was demanding. Stephen found things in the character of Jamie that were the physical posture, the way he says things, Alex suggested all kinds of wonderful things and he grabs pieces and just runs with them. They’re both great guys. If they pursue it they’re both going to have good careers.

DG: It’s not easy to put into words. You know, the acting instructors here understand. I think by the tie you understand acting you’re too old to play the ingénue anymore. I was a lousy actor, but I’ve been doing a lot of voice work for the English version of Japanese anime and I’ve been doing some other stuff and I’ve noticed that I’ve become a very competent actor, if you hand me something I can do it because I’ve learned so much about body language and voice modulation and most importantly being the character. You can’t just act the character, you have to be the person. The advice I would give to any writer or actor or anything is if you love it, do it and build up your 10 thousand hours of muscle memory so that it’s there for you, so that you’re not worrying about technique, you’re being technique. It’s the karate kid.

DS: What of yourself did you put into “Uncle Daddy?”

DG: The character Jamie is not autobiographical. He’s a composite of a lot of different things I’ve seen in the world, but the seed for Jamie was a thing I read on the internet somewhere. Some kid who had been thrown out by his mom when he turned 13 because she hadn’t been allowed to have an abortion and he was now starting to resemble the man who raped her when he hit puberty. And I thought, ‘What a dreadful thing to do to a kid’ and well there’s a story there. And I began thinking [about] the family life, and that became the seed of Jamie’s character. As I worked on Jamie’s monologue, who’s he telling it to? And it became obvious he’s telling it to the one person who he cares about the most, so it became about Jamie and Michael. Then I had to figure out how to get out of this. When you’re writing you put your hero in a tree and throw rocks at him, and what I’ve done to poor Jamie in the script was awful. He is owed a redemption, which is there, and it’s a very powerful redemption. Michael actually has a lot of me in the character, in that Michael has a genius level IQ, he was awkward, a nerd, didn’t understand why everyone else seemed to be the way they were, and finally became this performance of, he acted like everyone else so he would be accepted and was unhappy that way because he didn’t feel at ease. He starts realizing there is something more to life than being the performance. And so Michael doesn’t know who he is and is unhappy. Jamie knows who he is and is even more unhappy, and the two of them there’s an acceptance of each other’s weirdness  and so I identify a lot with both the characters because I’ve lived inside their heads, inside the writing, but there’s nothing autobiographical.

DS: Anything to say to the prospective audience?

DG: Bring Kleenex, because I’m sitting watching them rehearse with tears running down my cheeks. I would say bring Kleenex and seatbelts. You’re not going to be bored. Whatever happens, you’re not going to be bored. It’s fast-moving, it’s exciting, it’s sexy, it’s raw, it’s brutal. There’s some really strong language and some very mature themes. I think, in one respect, it’s not like anything this college has ever seen before because it’s not a safe play, it’s a subversive play.