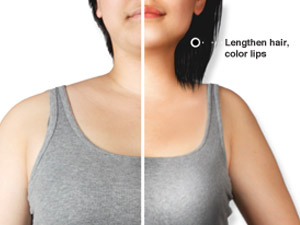 At a Media and Public Health Act (MPHA) Campaign meeting last semester, one girl shared her practice of stacking fashion magazines on a scale until they weighed as much as she did.

“When she would lose weight via her eating disorder, she would remove some of the magazines so her weight would match up again, tear out some pages and tape them to her wall for motivation I assume,” said Catherine Jermany, 22, a senior child and adolescent development major and liaison of MPHA CSUN.

Jermany is also a liaison for the Joint Advocates for Eating Disorders (JADE), an organization where peer educators reach out to spread awareness about and prevention of eating disorders.

She said this story made her realize the need for action, on a national scale, to expose digitally altered images in the media and provide truth in advertising.

CSUN is the first university to have an MPHA campaign on campus. The purpose of the campaign is to expose digitally-altered advertisements and deter students from trying to achieve an impossible look presented by multiple media outlets.

MPHA is a national campaign originally known as the Self Esteem Act. Seth Matlins founded MPHA in September 2012.

According to Feel More Better, an organization devoted to making the world a happier place for females by fighting against cultural ideals and norms, the only difference between the MPHA and the Self Esteem Act is the name. It was changed to clarify the cause and effect relationship between the media and public health.

The campaign requires disclaimers on photoshopped images that intentionally alter the human body. The act would not limit the amount of photoshopping, but would require digitally altered images to be labeled as such.

“Research has shown repeatedly how exposure to unrealistic images in the media can directly affect self-esteem and body image,” said Veronica Stotts, a staff psychologist at University Counseling Services and faculty consultant for JADE, who said she often works with students who have low self-esteem. “Young people are especially susceptible to this.”

But adolescents and women are not the only ones affected by these disorders. Up to 24 million Americans of all backgrounds and ages suffer from eating disorders according to The Eating Disorders Resource Center 2013 press release for National Eating Disorder Awareness Week.

Furthermore, about 1 million men are diagnosed with an eating disorder, according to The South Carolina Department of Mental Health 2006 report.

The release states that young people continue to be the primary population affected, with as many as 30 percent of girls and 16 percent of boys in American high schools suffering from eating disorders.

Stotts said men are also affected by misrepresentation in the media and are often photoshopped in a similar way as women, though there are some key gender differences.

“There was a huge boom in men’s magazines in the late 1990s,” she said. “Men are generally made to look bigger (e.g. more muscular) and women are made to look thinner.”

She added that men’s action figures have evolved since the ’70s and ’80s, and that attaining their physique is just as impossible as achieving Barbie’s physique.

“Not surprisingly, along with this we have seen an increase in rates of body dissatisfaction over the last 30 years as well as an increase in eating disorders in men,” Stotts said.

Karina Elias, 21, a senior gender and women’s studies major and head of social media for MPHA CSUN, said the media can improve people’s self-esteem with more realistic images of women and men.

“Media should reflect us and we should not have to reflect what we see in magazines,” she said. “It’s important to tell women their worth is not only their appearance even though media says their worth is only being pretty and skinny.”

Students involved in the project are currently creating a toolkit so that other universities can follow CSUN’s campaign model. Stotts said Santa Monica College is joining the campaign this semester and hopes many others will soon follow.

Stotts, Bobbie Eisenstock from the journalism department, and Kathleen Young from the public health department are the three professors who started the campaign at CSUN.

Eisenstock is an expert in media literacy, while Young guides student advocates for public health issues in D.C.

“It was a perfect collaboration and opportunity for CSUN students to see how to run a grassroots campaign,” Stotts said.

MHPA CSUN is comprised of JADE members, students both in Eisenstock and Young’s classes, and additional volunteers involved in the campaign.

JADE members give presentations to classrooms around campus showing images of how often photoshopping is done on a typical advertisement.

“(Students) are often shocked and angry,” Stotts said. “They see that is has impacted them and impacted their loved ones.”

“Of course media and advertisement are not the only factors that contribute to eating disorders, which by the way are the number one killer of all mental illnesses, but they are a huge factor,” Jermany said.

MPHA is partnering with the National Eating Disorder Association as part of a community engagement program through the Center for Innovation and Engaged Learning Opportunities (CIELO).

Stotts said funding for MPHA comes from CIELO and an endorsement from Associated Students.

Volunteers of MHPA CSUN have posted images on Twitter, Facebook, and Tumblr to expose false advertising. They have also taken political action by writing to Congress about false advertising in digitally altered images and participated in “Love Your Body” week.

Elias said the campaign made her more aware of the issue and she thinks everyone should be at least informed about how because media affects everyone.

Stotts said college students have the power to make real change in the world when they care about something.

“Look at Julia Bluhm who was 14 and petitioned Seventeen Magazine, or the fame in KONY 2012 which was all done through social media,” she said. “Both of these were nationally known campaigns that started with one person and a Facebook account.”

Interested students can contact any of the three professors, visit JADE’s webpage to learn about becoming a peer educator, or BeMediaLiterate.com for more information about MPHA.