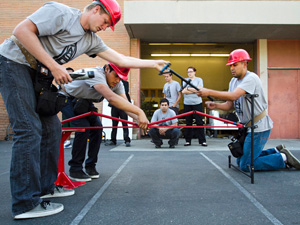 The CSUN chapter of the American Society of Civil Engineers’ (ASCE) Steel Bridge team won first place at the Pacific Southwest Conference earlier this month for their 92-pound bridge and will be advancing to nationals.

They will compete against the likes of Massachusetts Institute of Technology and University of California at Berkeley next month.

In the Steel Bridge competition, civil engineering students competed to build a bridge on sight and were judged in six categories.

“Ever since the rules for this year’s competition came out in August, we have been preparing,” Sotto said. “This semester, school has been like a second priority, we have been working late nights all semester.”

In the competition, five to six students per team pieced together a bridge that could support 2500 pounds as fast as possible. Three to five of them worked on separate sections of the bridge (they couldn’t cross into each others sections), while one to two of them were “runners” who handed tools and pieces back and forth to each of the builders, Sotto said.

“Essentially, we built a 92-pound bridge and put a Honda Civic on it,” said Christine Heinrich-Josties, who spearheaded the design for the steel bridge.

Competitive times are usually under 10 minutes. This year, CSUN had the winning time of six minutes and 48 seconds, Sotto said.

The team, which consists of about 25 contributing members of the ASCE club, broke the  preparation into phases to prepare for the competition.

“First, (there was) the study phase, where we considered different types of connections and materials, then (there was) the design phase, the manufacturing phase, the fabrication phase, which was done over Christmas break, and then finally the building phase when we practiced building on sight,” Sotto said.

The bridge’s success improved since last year after it was severely penalized for “excessive deflection” (how much the bridge lowers when the weight is applied), said Nargiss Majrooh, the ASCE club president.

“We still got third place, and we ranked in the top 24 at Nationals,” Majrooh said. “From those experiences, we learned our lessons and decided not to make those mistakes again.”

Heinrich-Josties attributes the team’s success to the strong dynamic and compatibility between the team’s core members.

“I think we are on track to place CSUN civil engineering nationally,” Heinrich-Josties said. “Honestly, with our design, our weigh (time) and our build time,  we can place in the top six, but we are aiming for first.”

Heinrich-Josties and Sotto are both seniors but hope to bring younger club members to nationals this year so they can motivate students to carry on their success in following years.

“Before it used to just be seniors. The past three to four years has been a progression and the captains take younger students under their wing,” Sotto said.  “It’s becoming a program rather than just a project.”

ASCE Nationals will take place at the University of Washington on May 31.

The Steel Bridge competition is among the most competitive of all the ASCE Nationals’ activities along with the Concrete Canoe competition, in which CSUN will also compete.

“We hope to get $20,000 to pay for travel expenses and rebuilding some of our bridge,” Sotto said. “We will be holding some fundraisers and we are hoping to get  $10,000 from sponsors, and then we are asking for $10,000 from Associated Students. We will see what they say.”

The club hopes to bring 20 members to the event.

“To win nationals, it would give a great recognition to the civil engineering department here at CSUN, because when people think of engineering they always think of the big schools,” Sotto said. “For us to beat schools like MIT and UC Berkeley, schools that are devoted to engineering, then it would show how strong our program is.”

The team expects nearly 50 schools to be at nationals in Washington, many of whom have had help from professional welders. CSUN’s steel bridge was prepared entirely by students.

“We do it because it’s great practical experience and (since it’s) entirely an extracurricular activity, it tells the civil engineering world that you have a passion for it,” Heinrich-Josties said. “It tests innovation and imagination.”