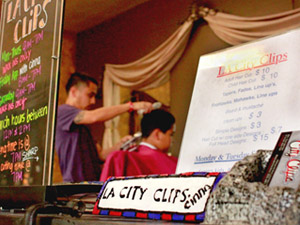 Starting a business takes courage, creativity and an understanding of market saturation. But Alonso Romo, 26, was only motivated by two things: he wanted to cut hair and not have a boss.

He opened up LA City Clips on Fourth Street in Boyle Heights seven months ago.

Success or failure was not part of the decision-making process, Romo said.

Although there are several hair salons and barber shops all over East Los Angeles and Boyle Heights, he decided on adding another one to the roster. One thing that gave him an advantage over other business start-ups was that he already had clientele.

Romo, a lifelong resident of Boyle Heights, started cutting hair in his family’s backyard six years ago. First and foremost he was an artist, drawing illustrations and designs. He picked up the clippers to cut designs on his friend’s hair.

“It was actually a hobby,” Romo said. “I was doing hair designs (where you do a figure on someone’s head). Since I was a kid, I liked drawing whatever I saw.”

Romo’s clients were impressed and he began charging. Haircuts were $5. Eventually, more people started coming by his backyard for haircuts. His makeshift canopy barber shop, equipped with his first barber chair is still there, coated in layers of dust.

He increased his price to $7, and it stayed that way for a while. Friends and family encouraged him to enroll in barber school. He saved up money from cutting hair, graduated from barber school and opened up LA City Clips – with every last dime coming out of his own pocket.

“I didn’t take out any bank loans,” Romo said.

His dedicated customers followed him to his barber shop. There is only one other barber, Edgar Garcia, 19, who works alongside Romo. Garcia has been cutting hair for four years and started working with Romo four months ago.

Allen Camacho, 15, is a student at neighboring Theodore Roosevelt High School just a few blocks away. He has been a regular customer at LA City Clips for the past two months, first having found out just by walking by.

“I just saw that it was open so I just came in and tried it out,” he said. “I like it that’s why I keep coming back. I usually get a tapper, a low-fade.”

He gets his haircut every two or three weeks, taking advantage of the weekly student discount Tuesdays and Thursdays.

Most customers know Romo on a first-name basis, some of whom are also avid basketball fans and players. LA City Clips is open six days a week, Monday through Saturday. Sundays they are closed, and Romo can usually be found playing basketball with some of his customers and cousins at Evergreen Park just a few blocks away.

As an avid Los Angeles Clippers fan, Romo takes a lot of inspiration from the team. Known as the city’s underdog team in the shadow of the Lakers, for Romo and others alike, the loyalty to the Clippers is almost religious. He sees his shop in the same way – the talent and potential to be great just as long as there is loyalty.

“The name LA City Clips, I got that from the Clippers,” Romo said. “Clips” has double meaning: the barber’s clippers and the basketball team, he said.

Alonso’s brother, Rafael, has been instrumental in supporting him. Rafael has experience running his own small company that specializes in family party organizing.

Much of the store’s aesthetic can be attributed to Rafael’s eye for design.

“We went for a more trendy, a more classy look, so that it can be a little bit more presentable,” he said. “So people can go in and see something different.”