Education is more than just classes 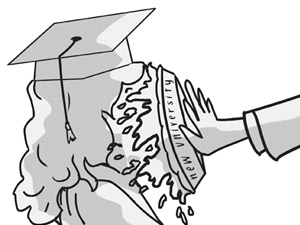 Ah, spring! The weather is getting warmer, birds flutter through the soft California breeze and, on college campuses throughout the state, students are beginning to realize the end is nigh. Well, the end of the spring semester, anyway. Finals are upon us. Semester projects and research papers are coming due. Some of us will even see the culmination of years of hard work and sacrifice when we graduate with the degrees we have damn near killed ourselves to complete.

Apparently, we’ve been going about this whole getting-an-education thing the wrong way. There’s no need to actually attend classes, engage in scholarly debate or even write a single analytical paper. According to Assemblyman Scott Wilk (R-Santa Clarita), all you need to do is pass a test.

Wilk, who earned a B.A. in political science from CSU Bakersfield, has proposed a bill that would establish a fourth collegiate system in the state. It would be called the New University of California and it would not actually have any classes.

It would, however, have tests.

According to the text of AB 1306, “the New University of California shall provide no instruction, and the mission of the university shall be limited to issuing college credit and baccalaureate and associate degrees to any person capable of passing the examinations administered by the university.”

Wow. Talk about teaching to the test. Or, rather, not teaching to the test. This is probably the logical culmination of that stellar bit of educational legislation we’ve all grown to know and love, No Child Left Behind. Years of evaluating students from Miami to Seattle with the same, out-of-touch standardized test questions has finally led to this. One thing we’ve learned from years of state testing – it’s one thing to be able to regurgitate answers on a Scantron. It’s another thing entirely to have actually learned something.

Now, learning is no longer a necessary step in earning a bachelor’s degree. Hell, you don’t even have to go to any of those annoying classes. This bill allows students to simply test out of all those troublesome college courses. Have these students really learned anything? Eh, who knows? If they pay the money to take the test, that’s good enough for Wilk.

Sadly, I can see the impetus behind this bit of legislation. As a returning student, I’m about 10-years older than the average college kid. I have some life experience, duking it out in the job market and it would have been nice to get some kind of credit for that. I remember thinking how absurd that, as a former actor, I was spending two evenings a week at a mandatory public speaking class. English 101 was a bit of a joke, since I had read most of the books on the syllabus years ago. It might have been nice to simply test out and move on.

I would have missed out on some pretty cool stuff, though. That evening class at Valley College taught me how to put my thoughts together in such a way as to support an argument. Going out with my fellow students after class taught me that you don’t challenge the president of the debate team at pub games. At least not after your third beverage. Yeah, I’d read “Frankenstein” in AP English before, but I’d never gotten to discuss the philosophical implications of Mary Shelley’s “Modern Prometheus” as it compared to the visual symbolism of Blade Runner.

Education is more than proving we can fill in the right bubble when the state asks us to. College is more than passing finals. There is a method to some of this madness. We’re supposed to get frustrated, dread a class or two. And then, we’re supposed to be able to look back and realize that even though we’re young and invincible, we did actually learn something. Even if we didn’t, we can at least be proud we made it through.

Then there are the classes we actually look forward to. That professor who makes you look at something in a whole new way. The classroom discussions that turn your worldview on its ear. The friend you studied with who is still your friend twenty years later. There are no tests that can be administered for those kinds of learning experiences.

There are some real practical problems with this idea as well. Who’s going to risk their reputation by supplying accreditation for this little endeavor? Part of earning credits for a college course is the time spent actually studying and attending the class. If there is no class, how will the credits work? How much will it cost to take the tests? If we fail do we get a do-over? Can we apply our tested-out-of credits to a really-show-up university?

This bill is an insult to anyone who has ever spent time working towards a degree. It’s a big slimy loogie-in-the face to students who have worked multiple jobs to put themselves through school. Anyone who has ever pulled an all-nighter before finals or sweated it out before a class presentation should be offended that this politician, who got his degree the old-fashioned way, would propose this hackneyed short-cut to a real education.