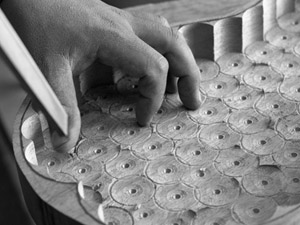 Mena is also a musician, and has years of experience playing the guitar, which helped spark his interest in building one. He real- ized, after working at a lumber yard for a year, that it was an ideal time to start working on the guitar with the resources he was surrounded by at his job.

With resources in hand, Mena set out to build a jarana, which is a Mexican style guitar, inside the garage behind his home in Mon- rovia, Calif.

Jaranas are typically made from one piece of wood, aside from the fret board and top body piece. Mena decided to use an African mahogany piece of wood to build his jarana.

He expressed a spiritual-like reflection when he spoke about the wood used for his jarana.

ond life or the second chance for the tree,” Mena said.

During the whole process, Mena felt nervous about what he was doing. He had no experience doing carpentry work, let alone building a guitar, and was extra careful when making the first cut.

Once he started, however, he began to grow a stong connection with his project.

“It’s sort of like when a car builder puts a car together, he sort of talks to that car,” Mena said. “He has that connection, you know, like that physical connection.”

Although Mena is not yet finished with the jarana, he expressed that he would love to make more guitars in the future. He again cites his pas- sion for building as a reason for continuing with this trade. “I have to be happy with what I’m making,” Mena said. “In order for me to keep going.”