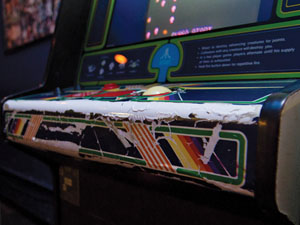 Arcades were immensely popular in the ‘80s and early ‘90s. They helped establish the burgeoning love for the home console market and introduced video games to a wider audience. Their popularity was as bright as the flash from an explosion and unfortunately they burned out just as quick. When game consoles started to show parity graphically with stand-up cabinets the nail was starting to be hammered into the coffin.

The appeal of the arcade scene faded away into an obscure collectors venue where old cabinets filled warehouses and game rooms in private homes. It also didn’t help that pinball and arcade machines are notoriously fragile. Their propensity to break means many of them have ended up wasting away as well.

Amazingly, video games have achieved a sort of cult status following and this means their retro roots are hip yet again. The burgeoning love results in arcades getting a second chance. The classic family friendly venues that dotted the country have started to turn into rough around the edges bars and water holes. In some ways this fits the style of the old machines. Beat up and dirty means it’s easier to put your beers and drinks on the broken and cracked plexiglass.

Blipsy Barcade is just that sort of dive bar. It’s in a building without much going on out front. The mini-mall next door has more character with its laundromat façade. But inside, Blipsy houses a treasure trove of classic arcade games. Most of the games inside have been relegated to 99 cent apps on your latest smart phone, but the games just don’t feel right unless you’re holding a joystick and pressing a button.

The bar has been active for about two years now. It’s hours run from 4pm to 2am and serves beer and liquor. Not just boasting classic arcade machines there is also a DJ booth with a rotating cast of artists depending on the night of the week.

Retro cool seems to be the norm nowadays and throwbacks to good times are relevant. Arcades inhabit this space and they specialize in lifestyle once forgotten. Booze and video games, who could ask for more?